Skip to content
Home News 21 or 2/2? Nadal and Medvedev chase history at the Australian Open 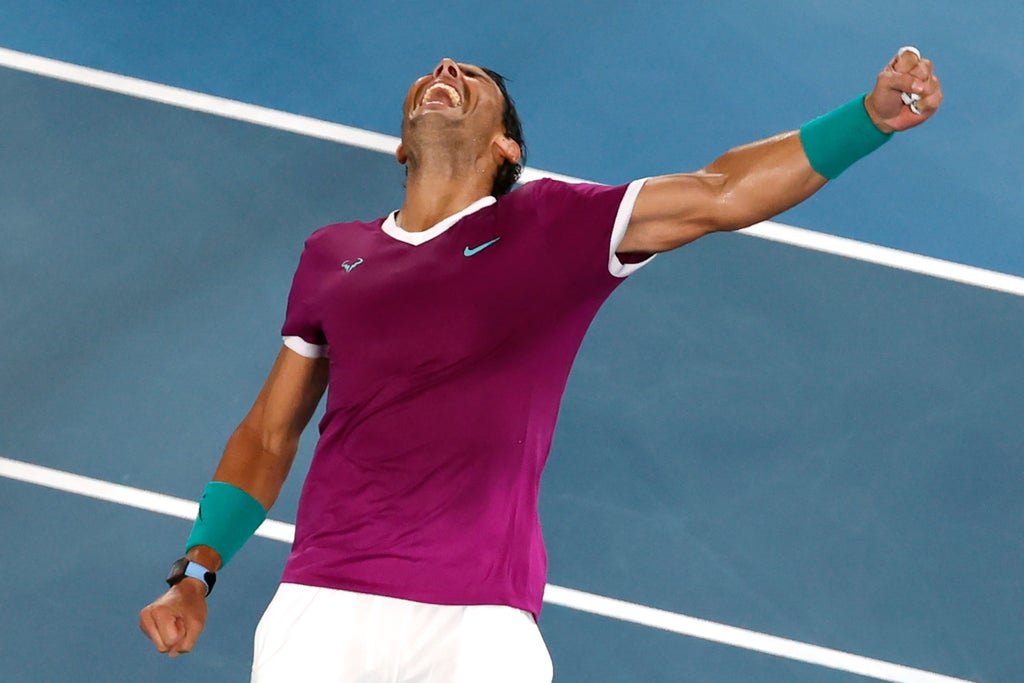 Since Wimbledon ended last July, there has been much discussion in tennis about the first man to win 21 Grand Slam titles.

Attention has been almost entirely focused on Novak Djokovic’s offer; almost none of that in Rafael Nadal

With the first Grand Slam title of 2022 to be determined on Sunday, it is Nadal who is just one win away.

He will play the Australian Open final against US Open champion Daniil Medvedev, who is aiming for back-to-back major titles and his own, albeit smaller, piece of history.

So much time in the making, so many months off tour for Nadal, and so much drama surrounding Djokovic’s deportation the night before his Australian Open title defense began, makes the race to 21 that much more compelling.

Nadal, only last month, wasn’t even sure if he would make it to Australia after long hours of frustratingly intensive rehabilitation from his foot injury that can never fully heal, and an outbreak of COVID-19.

“For me, it’s more about the Australian Open than anything,” Nadal said. “To be very honest, for me it is much more important to have the opportunity to play tennis than to win the 21st, isn’t it?”

Nadal is tied for the record, 20, with the absent Djokovic, a nine-time Australian Open champion who had his visa revoked for failing to meet the country’s strict COVID-19 requirements, and Roger Federer, who is still recovering. from surgery on his right knee.

Nadal went to 20 with his French Open title in 2020. Federer, now 40, has been stuck at 20 since winning the 2018 Australian title. Djokovic went from 17 to 20 with titles at Australia, Roland Garros and Wimbledon. in 2021. He was one win away from reaching 21, and completing a Grand Slam in a calendar year, until he lost to Medvedev in the US Open final.

“Yes, I am going to play again against one of the greatest. And what’s fun, again, I’m going to play someone who’s going for his 21st Slam,” Medvedev said in an on-court television interview after his heated semi-final win over Stefanos Tsitsipas. “I guess Rafa was watching (the US Open final) near the TV. . . I don’t know who he was cheering for. I think Novak will be watching this one too!”

Any debate about which of the three great players will be considered the best of all does not concern him.

“It’s a great rivalry between them,” Medvedev said. “I’ll be honest… I’m not going for 21, I’m not trying to break these records. I’m going for second.”

“I know what Rafa is looking for, I knew what Novak was looking for. I’m not going to say ‘Oh yeah, I’m trying not to hear about this.’ But it’s their thing, not mine. I’m just there to try and win the final.”

Nadal is also trying to block out all the noise. He has said more than once that this Australian Open is his main focus, and his life’s work and meaning will ultimately not be overshadowed by who ends up with the most major titles.

Nothing has changed about his ultra-competitiveness on the pitch, which he says is embedded in his DNA. But now he is more aware of being grateful to be back on tour after times when he thought a foot problem could end his tennis career prematurely.

See also  Polio is back: UK Public health officials declare a national incident after Poliovirus spreads for the first time since 1984

Medvedev had a fit of rage with a chair umpire during a change in the semifinals and then regained his composure to beat Tsitispas.

He described his run in Australia as “emotional,” which included dealing with a hostile crowd in his second-round victory over Nick Kyrgios, and having to save a match point and rally from two sets to beat Felix Auger-Aliassime. Five-hour quarterfinals.

After defeating Denis Shapovalov in a lengthy quarterfinal, Nadal had a comparatively stress-free 6-3, 6-2, 3-6, 6-3 victory over seventh seed Matteo Berrettini, who lost the Wimbledon final. against Djokovic last year. Nadal skipped Wimbledon after losing to Djokovic in the French Open semi-finals, and did not play at all after August.

Nadal even shed tears after confirming a place in a Grand Slam final for the 29th time.

Since winning the title here in 2009, he has lost in classic five-set finals to Djokovic in 2012 and Federer five years later. His other losses were to Stan Wawrinka (2014) and Djokovic (2019).

“I’ve had a little bit of bad luck (here) in my career with some injuries (and) played some amazing finals with good chances,” he said. “I feel very lucky to have won once. I never thought of another opportunity in 2022.”