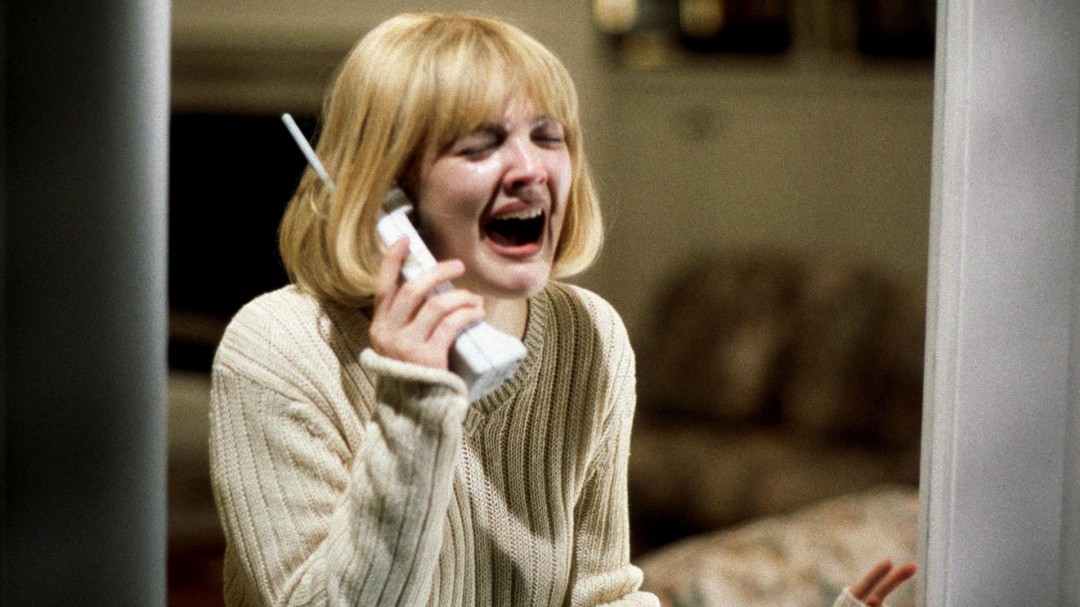 Scream revolutionized the horror genre in the 1990s. Who does not have in mind the scene in which the actress Drew Barrymore holds the phone and laughs. It’s the classic opening scene in this movie that turned into more than just teenage horror and a clever game of mirrors. Wes Craven – responsible for the franchise of Nightmare in Elm street-, managed to revitalize a genre that was about to disappear by reconstructing the codes and achieving new ones that moved several generations. Pop references, references to earlier horror movies, a new cast of actors and actresses, and an iconic villain in a mask that quickly became merchandising.

considered as slasher, a genre in which a group of characters is besieged one by one by a masked character of unknown identity, human or otherwise, Scream was so successful at the box office that it managed to have up to four sequels. The plot follows Sidney (Neve Campbell) and her teenage friends through a countdown to death. A killer calls on the phone and asks “What’s your favorite horror movie?” Thus begins the persecution that shakes a small quiet American town, Woodsboro, and its young inhabitants, among which stand out: the demure young woman, the promiscuous young woman, the classy handsome … all the stereotypes of American high school movies.

This Friday the fifth is released, of which the distributor Paramount Pictures has not let the press see anything, except the influencers to be promoted. But let’s leave the fifth and focus on the others, especially the original and the keys to its success.

“It gave him commercial and public respectability”, says Luis Pérez Ochando, professor of Art History at the University of Valencia and author of All Young People Will Die: Ideology and Rite in the Slasher Film. “What until then was considered a minor entertainment or even a garbage genre, with Scream it becomes a movie that could say interesting things, be scary and make money on top of it, something that is always relevant to Hollywood. “

Money is the key to everything and what leads us to establish the slasher Y Scream as a paradigm of neoliberal ideology, which few disputed in the 1990s. “A very interesting parallel can be drawn between how the neoliberal ideology of the eighties and nineties developed and how the slasher it is evolving as a genre “, Pérez de Ochando explains to us. That is the thesis of his book, a review of the different slashers until reaching Scream.

“It is interesting how it reflects the culture in which its characters live. Because not only do they include references from the previous horror genre, but also references from that generation, the world of the video store, MTV … A series of cultural references from a generation that it shows how their values ​​had been shaped at that particular moment, “he adds. Values ​​associated with a social Darwinism, that occupies the place you deserve according to your skills and ambitions. It is the time of The end of history of Fukuyama, of Wall Street, of Friends…

All that changes with the New York attacks. The world was another, more insecure, gray, more distrustful and more neurotic. Fiction, both on television and in movies, changed remarkably. Those changes also influenced the terror. “Before September 11, the slasher he did not recreate how a character is tortured and killed, it was more of a kind of scare. “However, after the Twin Towers, torture began to appear systematically.” It is significant that when cases of torture began to be revealed in Guantánamo or Abu Ghraib, when violence has become a political spectacle and torture an almost legitimate tool in defense against terrorism, that begins to be seen in the cinema. “And there the rise of one of the most brutal and blockbuster horror sagas of the last years, Saw. “It wouldn’t have been a movie mainstream if it hadn’t been released after 9/11, “says the author.

Movies give us a lot of information about the world and society we live in and about ourselves, as we used to see with Saw. With Scream there is much to elucidate. For example, like many others slasher, reflects the passage of its characters to adulthood. It does, unlike Carrie that tells the fears of that transition, looking at what are the qualities of the characters to reach the adult world, in short, to survive. “We see how the characters who are not prepared to reach that adult world, whether they are promiscuous young women who do not like the patriarchy or they are irresponsible and immature characters, die”, our expert emphasizes.

So that the slasher He is guiding us through the behavior that young people must carry in a society so that nothing happens to them, to be successful. “That youthful effervescence, that Dionysian spirit ends up disappearing. The one who survives is the responsible, more focused girl and also the one who is capable of killing. It is paradoxical that the one who survives is the one who is capable of killing like the murderer. The fittest survives. , the strongest and that has to do with the neoliberal logic that appears in our culture and in our institutions. ” This is how López Ochando links this social Darwinism with Hollywood terror.

This type of reading, of instruction, is not exclusive to the slasher, it also appears in other genres, even in other formats, such as the reality show. “In the end there is a chosen one who is better than the others and deserves it and they are transmitting the idea to you as a spectator that you deserve to be rich, to be at the top and the others do not.” In them the end is not as tragic as for the characters of a slasher, but it ends up generating monsters, such as psychological problems.

The movies of Scream they go a little further. They are somewhat more critical. “By having more reflection, many times, they show how empty that society is,” says this professor. It is perfectly seen in the fourth installment, which was released years later. It is the most recent and with which it is easier to connect the current moment. “In it, you realize that the assassin’s vocation is none other than being famous, being surrounded by cameras. Going to stardom without doing anything, which is often the idea that underlies this neoliberal ideology.” It was therefore a look at the youtubers, a Tik Tok, at influencers already heart programs. “Scream 4 I was talking about the culture of the self, about fame and how that desire for celebrity had become the greatest desire of an entire generation, “he adds.

As we said, little is known about the fifth installment, beyond that it brings together part of the original cast, Neve Campbell, Courtney Cox, whose character showed the yellowishness and banality of the media. “In the fifth I do not know what it will reflect, but if it follows the trend of the saga, it will surely say interesting things about the world in which we live,” he predicts. The truth is that neither the specialized press nor the critics have seen the film before its premiere. Yes they will see it youtubers e influencers, the villains of the previous installment paradoxically.

Who will be the villain or villain of this new movie? “I think that someone related to the manipulation of the media, post-truth, denialism, which would be the hot issues of the last two years,” replied Pérez Ochando. An installment that comes at a time when the horror genre is experiencing a sweet moment with the most sensible critics. Titanium, by Julia Ducournau, won at Cannes, and lately horror films are beginning to be legitimized by the great festivals and critics for their way of talking about today’s society. “Terror has always had very interesting and intellectual things. Bergman did terror in Hour of the wolf. Silent movies have great films by great directors who are horror, like Nosferatu. What has happened in these years is a critical revaluation of films that are more intellectual and that put in the forefront not so much the visceral part as the intellectual part, the message. This bothers some viewers because terror has a very visceral part, “he explains. If we live in a world in which everything is merchandise, we ourselves end up being it too, warns us the most popular saga of recent decades.