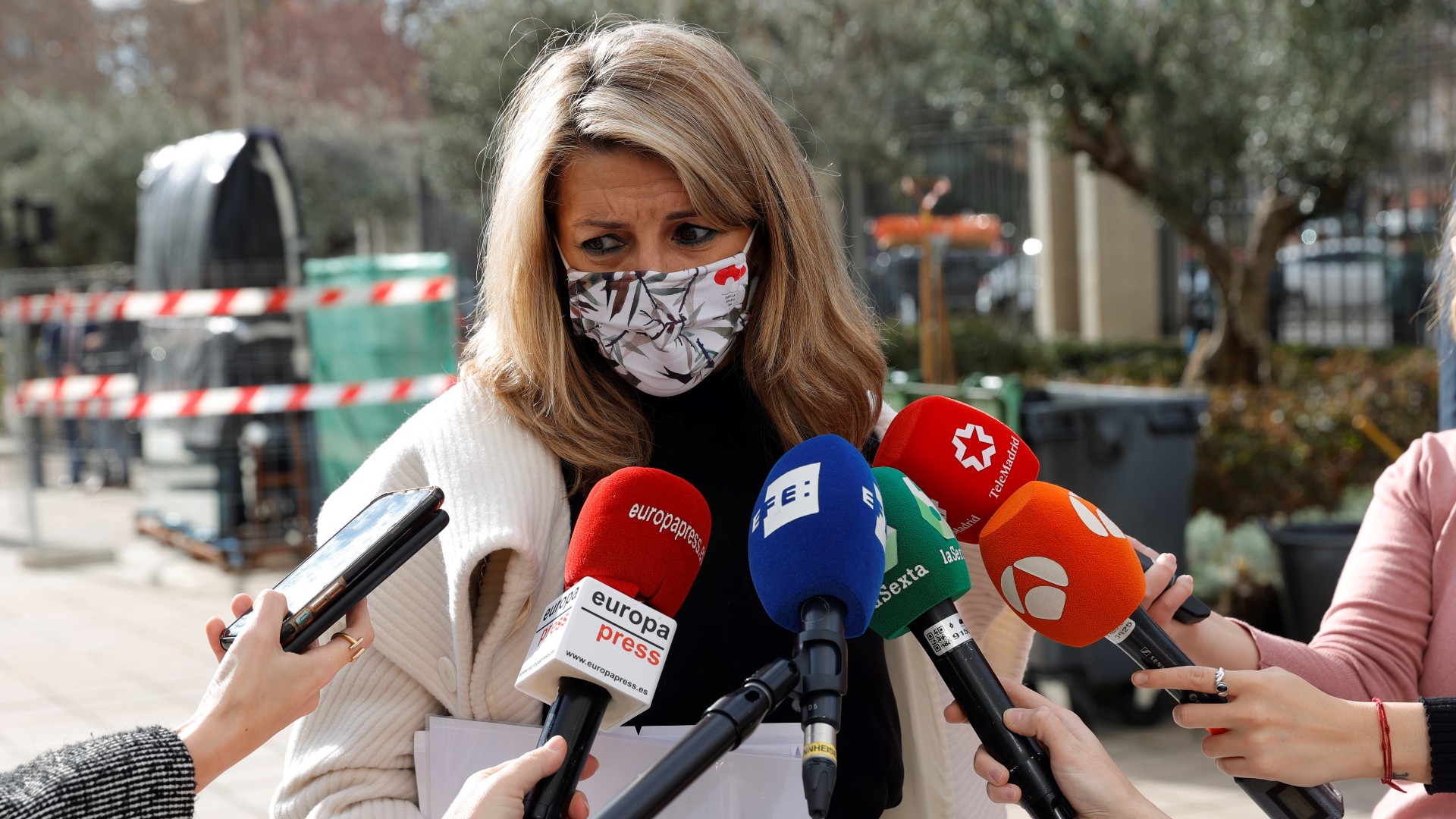 Follow the controversy on the statements of the Minister of Consumption, Alberto Garzon, against macro farms. United We can have accused the PP and PSOE of using the “hoax” about the minister to “attack” the ‘purple’ formation in a “Attempt to restore bipartisanship”, something that sees “worrying”, and the second vice president of the Government and Minister of Labor, Yolanda Díaz, has called to “take care of the coalition” and “the words”.

Several leaders of United We Can have spoken like this after the President of the Government, Pedro Sanchez, I said this Monday that regrets “very much” Garzón’s words and has defended the “extraordinary quality” of the meat produced in Spain.

In statements to the press before attending the Government meeting with social agents this Monday, Diaz has referred to the issue and has ensured that “the Government of Spain” defends and is committed to “extensive and sustainable livestock farming”. “And this obliges us to the entire Government as a whole,” he has influenced. He then added: “I would also ask that let’s take care of the coalition and let’s be careful with our words ”.

Díaz stressed that governments speak with “the documents”, pointing out that in this case they are the European objectives and the 2030 Agenda, and that, he stated, “they make clear the Executive’s commitment to extensive and sustainable livestock farming.” In this way, he has ensured that Alberto Garzón, with his statements about macrofarms in an interview with the newspaper ‘The Guardian’, has “corroborated” the line of the Executive collected in these “public documents”, which are “clear”.

Also at a press conference, Podemos spokesman Pablo Fernández has called it “worrying” and “disturbing” that the “hoax that is being repeated in recent weeks” around the controversy over macro farms “is shared by PP and Vox , as also used or employed by the PSOE ”.

Fernandez has subscribed the words of Garzón against the macrofarms, whose model “causes a huge environmental degradation due to greenhouse gas emissions and pollution in aquifers and soils ”, it generates“ much less employment than family farms and aggravates and exacerbates depopulation ”.

“There are two models” of the meat industry, he argued. “Ours is sharp and clear and what worries and worries us is that they are creating hoaxes and using fake news in a tortuous way to attack Podemos “, something that they do, has said, PP and PSOE in “an attempt to restore bipartisanship”: “Something that has been shown to be unfeasible.”

It has affected that PP and PSOE “seem determined to reissue that two-party system” and “it seems that the next stop they want to reissue is the elections of Castilla y León “ next February 13.

“The controversy has not been generated by Minister Garzón, but by the extreme right propagating hoaxes.

We regret that the President is more concerned with losing votes in Castilla y León than with defending cattle ranchers against macro-farms.pic.twitter.com/m5oRByqICE“

The spokesperson for the Confederal Group of United We Can in Congress, Jaume Asens, has also assured on his Twitter profile that “The controversy has not been generated by Minister Garzón, but by the extreme right propagating hoaxes“.” We regret that the President is more concerned about losing votes in Castilla y León than in defending the ranchers against the macro-farms, “he has settled.

Minister Garzón said in a interview in the British newspaper The Guardian on December 26: “Extensive livestock is an environmentally sustainable livestock environment and one that has a lot of weight in parts of Spain such as Asturias, parts of Castilla y León, Andalusia and Extremadura.” “That is sustainable; what is not sustainable at all are those so-called macro farms… They find a town in an unpopulated area of ​​Spain and place 1,000, or 5,000, or 10,000 head of cattle there. They pollute the land, they pollute the water and then they export this poor quality meat from these abused animals. “

However, a Spanish magazine, Revista Cárnica, published a later article entitled: “Garzón affirms in The Guardian that Spain exports poor-quality meat from abused animals.” In the article, not all the minister’s texts were included (as the VerificaRTVE team later verified) and controversy arose.

Controversy that has led to PP, Vox and Cs to demand that Sánchez dismiss the minister. The Prime Minister, in an interview this Monday on Cadena Ser, limited himself to regretting “a lot” the words of Garzón and has avoided answering if he thinks he was speaking in a personal capacity or as Minister of Consumption. He has also insisted on defending the “extraordinary quality of the meat”.

Montesinos believes that Sánchez does not “control” his ministers: “He does not dare to dismiss Garzón despite the clamor”

However, the PP, which has already announced a “parliamentary and institutional offensive” based on motions in municipalities and regional parliaments and initiatives in Congress and the Senate, has once again criticized the Executive. Your Vice Secretary for Communication of the Popular Party, Pablo Montesinos, has reproached this Monday on TVE that Sánchez does not “control” his ministers and that “he does not dare to cease Garzón despite the clamor” of the ranchers. He has thus referred to the concentration of ranchers this Sunday in Palencia, in which shouts were heard to demand the dismissal of the minister.

Vox, for its part, has announced that will present motions in the next few days in all town halls where he is represented in support of the livestock sector and meat consumption in Spain and of rejection of the criticisms made by the Minister of Consumption, Alberto Garzón, against extensive livestock farming.