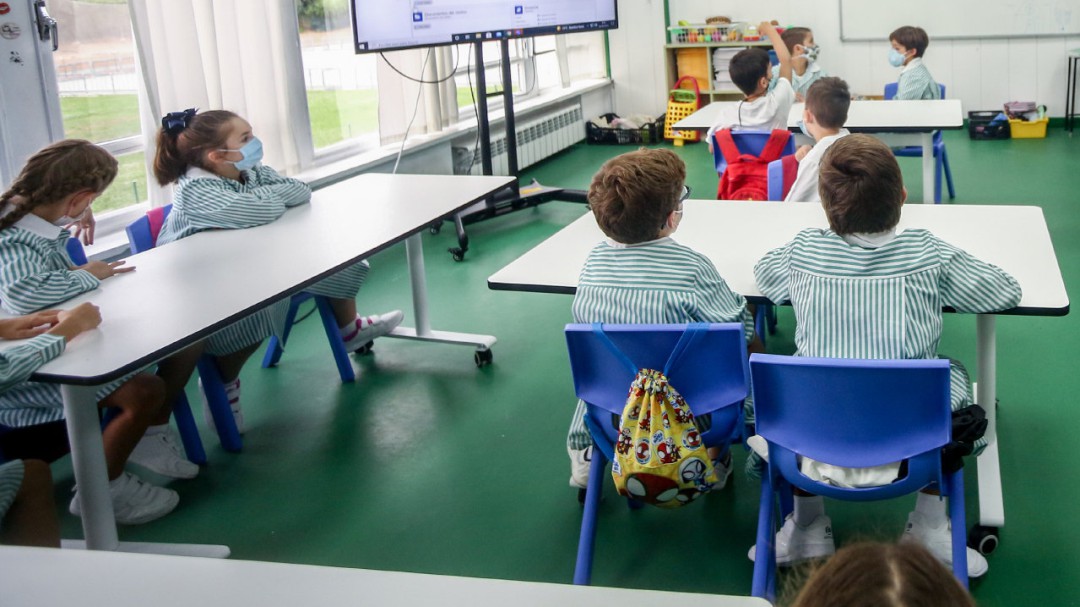 There is a lot of concern among the families and the management teams of the centers that throughout the weekend have been receiving the first notifications of withdrawal of teachers infected with COVID-19 through WhatsApp. They ask the autonomous communities to accelerate as much as possible the mechanism to cover them because they fear an avalanche, according to the president of the Federation of Public Center Directors, Toni González Picornell, says in the SER: “We need places to be awarded not only in cases of seven days of quarantine, but also the cases of three or four days because we have to think that there will be a forecast of between 10% and 20% of teachers who will be on leave or isolated until they can rejoin the classrooms”.

The new protocol of the Interterritorial Council of the National Health System, the text of which Cadena SER has had access to, recommends not performing diagnostic tests on close contacts except the vulnerable, nor do mass screening in centers despite relaxing quarantines because the class will only be isolated from five positives. Catalonia is unchecked and will do free tests when a case is detected.

This protocol indicates that “the proactive closure of educational centers has been shown to have a negative impact at the level of development and education of the population in the learning stage”. It is the argument to defend “presence in classrooms regardless of the epidemiological situation.”

The document indicates that there is evidence that “the child population has a much lower risk of suffering from serious forms of COVID-19.” “The epidemiological analysis in the population under 12 years of age during the fifth pandemic wave, showed that approximately 99.5% of the diagnosed cases presented a mild condition, being around 50% asymptomatic”, it is added.

It also stresses the need to “take into account the impact on family and work reconciliation as well as” the risk that the care of young children may have for potential vulnerable caregivers in a situation where classrooms or schools are closed.

In isolated or suspected cases

The protocol confirms that classrooms will not be closed “if there is not at least a group of 5 or more confirmed cases in the same or 20% of the students” and reminds us how to act in the event of COVID or suspicion:

“Students, teachers or other personnel who present respiratory symptoms compatible with COVID-19, regardless of their vaccination status, should not go to the educational center until they have a result of a diagnostic test1 or if it has not been possible to perform diagnostic test, until the end of the minimum isolation period of 7 days and provided that 3 days have elapsed since the end of the clinical picture.After the isolation period and up to 10 days after the onset of symptoms or the date of diagnosis in the Asymptomatic cases, positive people should exercise extreme precautions and reduce social interactions as much as possible by constantly using the mask, in accordance with current legislation. Contact with vulnerable people should especially be avoided. In certain situations, such as diagnostic tests in children and in those people in whom another type of sample cannot be extracted from the respiratory tract In the laboratory, PCR can be performed on saliva samples as an alternative of choice to taking a nasopharyngeal sample “.

With 4 confirmed cases or less

“Confirmed cases should not go to the center and should remain in isolation until 3 days after the end of the clinical picture and a minimum of 7 days from the onset of symptoms or from diagnosis in asymptomatic cases. As specified above, neither people with symptoms compatible with COVID-19 should go to the educational center.After the isolation period and up to 10 days after the onset of symptoms or the date of diagnosis in asymptomatic cases, positive people should exercise extreme caution and reduce everything As much as possible, social interactions using the mask constantly, in accordance with current legislation. Contact with vulnerable people should especially be avoided. As indicated in the Adaptation of the Strategy for early detection, surveillance and control, it is not It is necessary to carry out a diagnostic test at discharge to be able to lift the isolation Before the appearance of a first case in u n classroom and up to a total of 4, the students of the infantile and primary educational levels will not quarantine (with the exception of people with immunosuppression). The teaching staff and other staff of the center and the population aged 12 years and over will follow the quarantine indications that are proposed for the general population according to the Adaptation of the Early Detection, Surveillance and Control Strategy published on December 30, 2021 The special education centers are considered vulnerable environments, and what is indicated in the Adaptation of the Strategy for early detection, surveillance and control will be applied to them. Also in accordance with the adaptation of this Strategy, PDIA will only be carried out to vulnerable close contacts or who live in vulnerable environments. The COVID managers of the educational centers will inform the teachers and staff of the center related to the classroom and the relatives or legal guardians of the rest of the children in a class where confirmed cases of the situation have been detected and they will be indicated that during the 10 days after the last exposure, they take extreme precautions and reduce social interactions as much as possible by constantly using the mask in accordance with current legislation. Especially contact with vulnerable people should be avoided. Likewise, they will be instructed not to attend class before the appearance of compatible symptoms and to contact the health system as established in each Autonomous Community “.

Before 5 cases of COVID or more

“At all educational levels and with respect to teachers and other staff of the center, the quarantine indications that are proposed for the general population will be followed according to the Adaptation of the Strategy for early detection, surveillance and control published on December 30 2021. After the quarantine period when appropriate and up to 10 days after the last day of contact with the case, they must take extreme precautions (use the mask in accordance with current legislation, limitation of the number of social contacts …) Also in accordance with the adaptation of this Strategy, PDIA will only be carried out to vulnerable close contacts or who live in vulnerable environments. In none of the scenarios is it recommended at this time to carry out mass screening in schools, unless otherwise Exceptionally so indicated by the public health authorities.If it is considered that an uncontrolled transmission is taking place in a c In the educational center, the public health services of the autonomous communities will carry out a risk assessment to analyze the need to scale up the measures, ultimately evaluating the temporary closure of the educational center. The same criteria will be applied to extracurricular activities carried out in educational centers “.