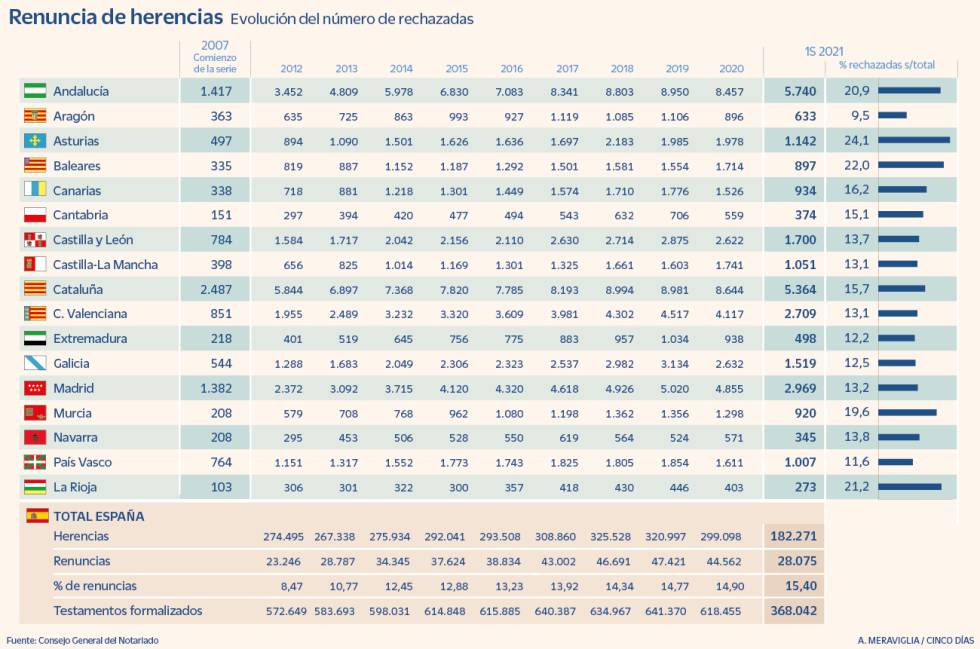 The year 2021 is called to become the year with the most waivers of inheritance in the entire historical series compiled by the General Council of Notaries (CGN). It is still too early to give exact figures, since notaries continue to collect information from recent months, but if the rate registered in the first half of the year is maintained between July and December, 2021 will close with about 55,000 rejected inheritances, a maximum indisputable. “We have no reason to think that this trend will change in the second half of 2021,” confirms CGN spokesperson María Teresa Barea, who sees a new record in the second year under the effects of the pandemic.

For now, with official data, between January and June 2021 the Spanish rejected about 28,000 inheritances of the 182,000 awards by succession title made, 15.4%. In previous years, with consolidated data for the entire year, the percentage of resignations ranged between 8.5% in 2012 and 14.9% in 2020, the year that, in the absence of knowing what will happen in 2021, holds the record to date. In absolute figures, on the other hand, the maximum was recorded in 2019 with 47,400 rejections, 14.8%. The already finalized 2021 would therefore register unusual marks both in total number and in proportion.

As Barea explains, and although behind these figures there are many reasons, the most common is the existence of debts: “The heir finds that the deceased has left more liabilities than assets, and decides to reject the award.”

The high rates of resignations noted both in 2020 and predictably in 2021, could be explained, suggests Barea, by the economic crisis derived from the Covid-19 pandemic. “It is very possible that in a time of economic difficulties we will find more inheritances with more liabilities than assets,” highlights the spokesperson, who recalls that there is a figure, the “acceptance for the benefit of inventory”, which allows “to save the pre-existing equity of the possible debt ”.

This formula, he continues, is designed to be used in those “gray inheritances”, when there is no exact information on the assets and obligations to be received. In this way, the heir responds to possible debts contracted only with the assets that are framed within the legacy itself, without putting his previous assets at risk.

This option, Barea regrets, is practically unknown in Spain. According to CGN data, in the first half of 2021 only 743 hederos took advantage of it. In the previous three years, the number ranged from 796 to 854 people.

The fear of possible debts, however, is not the only reason that leads an heir to reject the succession. They are common, says Barea, resignations for personal reasons such as the lack of relationship with the deceased, which leads many to “see unfair benefit from the inheritance of someone they barely knew,” he illustrates. This is usually the case for distant relatives with little treatment.

However, after the suspicion of finding a liability and other obligations, the other great reason that leads many to refuse the inheritance are the costs associated with the processing itself. Here, taxes such as inheritance or municipal capital gains on real estate, for example, would come into play. These resignations, explains Barea, tend to occur in cases of “inheritances with little liquidity”, in which, for example, a home is received but no money. This situation, very common according to the spokesperson, leads many heirs who at that time have no liquidity to be forced to reject the succession because they cannot afford the associated procedures, which must also be solved within a period of six months.

The CGN, as a body, does not assess the design or suitability of tributes such as Successions, but it does observe, according to Barea, how those regions that have significant bonuses in these taxes – which are usually related to the relationship of the deceased and heir – tend to record proportions of resignations lower than the national average.

In Successions, the tax of which ranges between 7.6% and 34% depending on how much is inherited, the highest amounts are recorded in Asturias, Castilla y León and the Valencian Community. On the other side are Galicia, Cantabria, Andalusia and Madrid, with a 99% discount for direct family members. By region, the highest proportion of resignations between January and June 2021 occurred in Asturias (24%), although others such as Andalusia registered 21%. In Madrid it was 13%, although others like Extremadura scored only 12%.

In parallel, the notaries warn, the health and economic crisis has also changed the customs of the Spanish when it comes to “leaving everything in order in situations of uncertainty,” explains Barea. For all these reasons, it is expected that 2021 will also record a record in the number of signed wills. In the first half of the year, notaries have formalized more than 368,000 documents throughout Spain, a figure that, if the trend continues, would yield more than 735,000 wills accumulated for the year. The record, for now, is in 2019, with 641,000 documents. Although it must be taken into account that part of this flood comes from the drag effect after several months of 2020 under confinement and restrictions, the council has observed a change in trend.