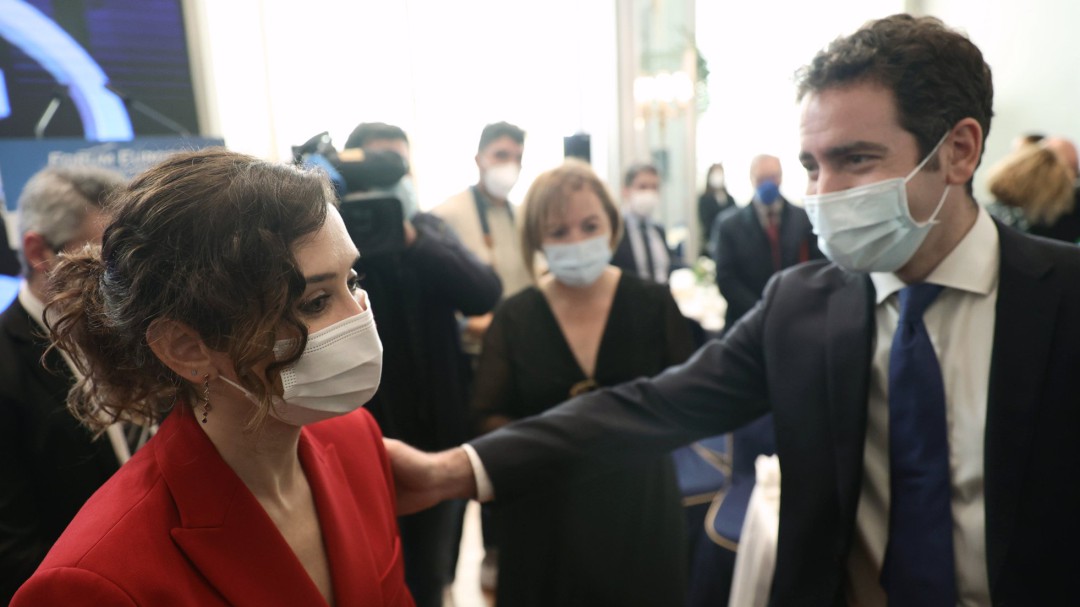 The general secretary of the PP, Teodoro García Egea, has supported this Monday the president of the Community of Madrid, Isabel Díaz Ayuso, and has assured that the PP is a united and cohesive party despite the fact that its opponents seek confrontations.

Although they did not coincide in public for months, after the struggle for control of the Madrid PP, García Egea and Díaz Ayuso have arrived together at the informative breakfast that the Madrid president stars in a hotel in Madrid, in which she has been presented by Alfonso Fernández Mañueco, president of the Junta de Castilla y León who aspires to his re-election.

García Egea has excused the absence of the leader of the PP, Pablo Casado, who this Monday undergoes a test to see if he has overcome his coronavirus infection and has told his opponents to lose all hope: the PP candidates are from the PP.

According to number two of the PP, many parties would like to have leaders such as Díaz Ayuso or Fernández Mañueco and “in this attempt they will try throughout this year to seek any type of confrontation between different parts of the same united and cohesive party as is the PP “.

He has told “those from Vox” and from other parties that if they want their candidates “to join the PP”, which, he stressed, will “win all the elections that are called from now on.”

In this sense, he has downplayed the possibility that PP supporters prefer Díaz Ayuso over Casado, a hypothesis that frames the “leadership factory” in which the PP has become.

In addition, he has confronted Vox, whom he has accused of not seeking to solve people’s problems but “something else.”

And after pointing out that in the Community of Madrid they have gone “through the hoop” when approving the budgets despite not having achieved the repeal of the LGTBI laws, he has asked himself: “Is Vox using all Madrilenians as hostages to try face people from the PP? “.

García Egea has advised Fernández Mañueco to be guided by his principles when establishing pacts, the same principles that in his opinion Vox skips, and the Spaniards have told them that if they want the policies of the PP, vote for the PP, which is the the only one who will win elections.

Asked about the Madrid PP congress, he has emphasized his message: “I understand that the political adversaries are interested in the fact that the PP does not have the necessary harmony to face those attacks that come from both the left and the false right.”

For her part, the Madrid president stressed in her speech during breakfast that Pablo Casado is the one who is going to lead “the political change in Spain” and that this change is “unstoppable” also due to the “lies” and the “damage caused by the Executive of Sánchez “.

“My only job will be to be next to the president of the PP, Pablo Casado, so that together with the rest of the regional presidents, the national leadership, the deputies and senators of my party, he arrives as soon as possible to lead this change so necessary for Spain, “said Díaz Ayuso.

Regarding internal relations in the PP, although he has recognized that in the “last quarter” they have been giving “some headlines”, the situation is “total normal” and he thanked the national leadership for attending this breakfast.