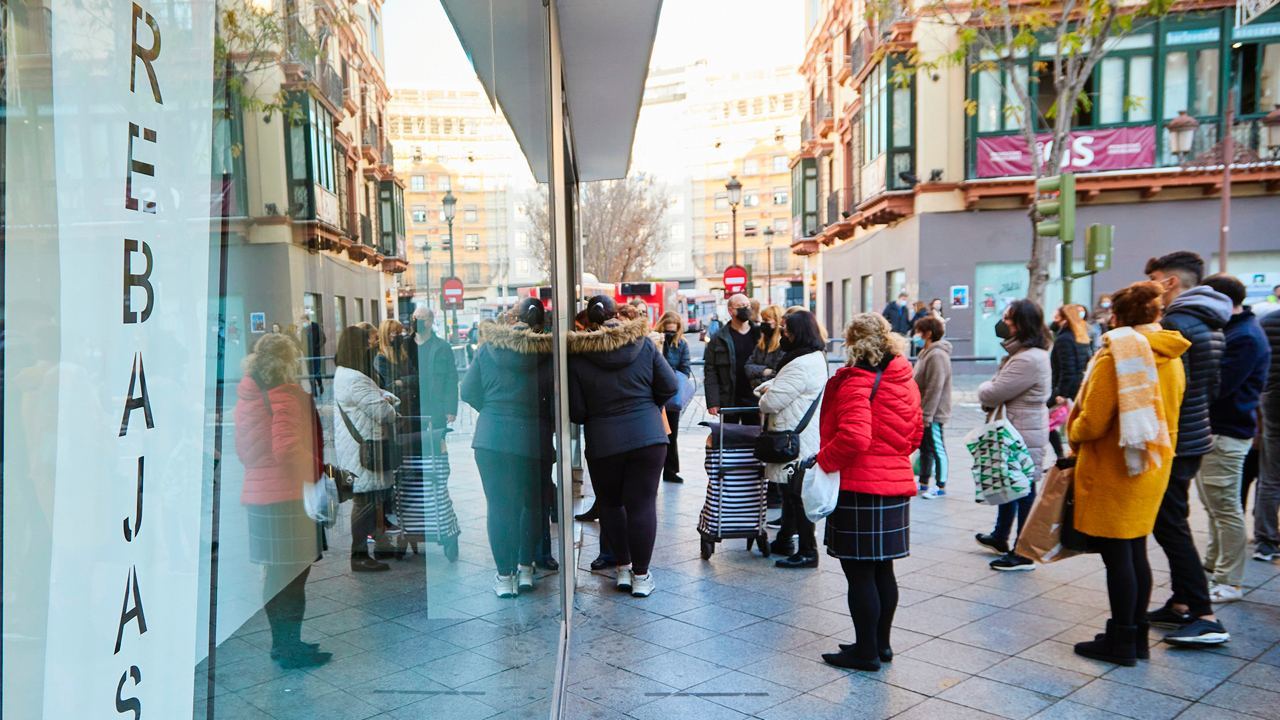 The omicron variant of SARS-CoV-2 has completely changed the narrative about the desired end of the pandemic. In fact, although the context is very different, thanks mainly to vaccines, it gives the feeling of having returned to the starting box.

Christmas ends in Spain and around the world with the highest growth in cases recorded in the entire pandemic. At the end of October, in our country we congratulated ourselves on the apparent success of a level of controlled circulation, with a cumulative incidence below 50 cases per 100,000 inhabitants in the last 14 days and one of the highest vaccination rates in Europe . Currently, the incidence rate reaches 2,722 cases, and nine communities are above the national average.

The growth in the number of infections is once again exponential, that is, cases multiply every few days. If on December 1 there were 5.1 million positives registered in Spain, the day before Christmas Eve they were already 5.7 million, and now, according to the latest data from the Ministry of Health, they already exceed 7.1 million. Have been notified almost two million cases in the last month, 27% of the total registered in the entire pandemic.

This is knowing that the real number of infections is much higher, mainly due to the underreporting of cases in the first wave, in the spring of 2020. But now, an accounting loss of positives is also being suffered, because not all communities register self-diagnosis tests, Health does not include them in the official data and because of the collapse of the tracking systems, which leave the monitoring of many cases off the radar.

More than two months of incidence growth, one at full speed

The growth rate of this wave is dizzying, but also sustained, as can be seen in the following graph, which shows the daily percentage change in the accumulated incidence at 14 days. It is striking that the incidence grew relatively faster in the fifth wave, that of last summer. The acceleration is not as intense now as it was then, but it started at a lower point, has been climbing for two months in a row, and is occurring on an ever-increasing basis.

At the moment, this change in trend is not in sight neither in Spain nor in other European countries or the northern hemisphere, with which we share a winter season. Spain is once again one of the countries with the highest cumulative incidence in Europe and among those with the highest daily growth rate of cases, currently only behind Greece, Denmark, the United Kingdom and France.

And to flatten the curve -the ‘leitmotif’ of the pandemic that has lost steam- after the Christmas celebrations will have to have a radical change in social interaction. But for the moment the Government does not bet on promoting new restrictions and the president, Pedro Sánchez, insists on “persevering in the strategy that has paid off”, based on vaccination, but also on personal protection with measures such as “massive use of the masks “. It is the communities in the worst situation that are extending restrictions, such as curfew or the closure of hotels and nightlife at a certain time of night.

For now incidence is still far from tipping point, and poor prospects are widespread. The highest incidence occurs in adults between 20 and 49 years old, who are the groups with the lowest vaccination coverage and the highest degree of risky social interaction, when they meet in closed places without masks. That the incidence exceeds 10,000 points in young people from Navarra aged 20 to 29 or 9,000 in the Basque Country it is a clear indicator of the lack of control of infections: in the last two weeks one in ten twenty-somethings in these communities has been infected.

The cumulative incidence, which has always been a very valuable epidemiological indicator to show the level of control of transmission and because it is a precursor of pressure on the health system, is losing its meaning. And although it is triggered like never before, the truth is that the real data is even greater.

Even without the statistical derailment of the contagion data series, it has become obvious that the relationship between cases, hospitalizations and deaths has decoupled compared to previous waves. At the moment, the number of cases does not carry the same correlation in terms of the severity of the disease and its mortality as before.

This disparity has led to the assumption that the omicron variant is less lethal and less serious., which would place us before the beginning of the end of the pandemic because the virus would be becoming less aggressive. A belief that health authorities deny, with the World Health Organization (WHO) warning that this new variant should not be downplayed, which is causing enormous pressure on healthcare systems around the planet, but has installed in public opinion.

One term has made its way into the news: the ‘flu’ of COVID-19. The hope, not yet certified by the evidence, that the coronavirus would go from pandemic to endemic disease. We are not yet on that stage. “It is a total error to trivialize this sixth wave and think that we are facing a ‘flu’,” insists epidemiologist Daniel López Acuña, former director of health action in crisis situations at the WHO. And in any case, there is no endemic disease that accumulates hundreds of thousands of infections and so much income in such a short time.

Hospital saturation will worsen in January

The only thing that is clear is that if this wave is being less severe it is largely due to the high vaccination rate and, although it causes less serious clinical pictures, previous levels of hospital saturation can be reached due to the enormous accumulation of cases. The collapse at the primary care level is already being experienced, with health centers and consultations prioritizing urgent care at the expense of ordinary activity, a situation that, for example, Cantabria has decided to extend until January 31.

That is the dynamic that has been observed in all the waves and that is also occurring in this one. The occupation of COVID beds in hospitals and especially in intensive care units has grown slowly since last October, when the sixth wave officially began, but since December it has accelerated and today it has already exceeded the levels of the fourth and fifth wave. In April and August, the maximum was around 10,500 patients and around 2,000 in the ICU. As of January 7, there are 14,426 people admitted and 2,056 in intensive care.

If the healthcare pressure continues to grow, the omicron wave could be equated to the waves prior to vaccination, with the occupation levels of last winter, weakening the entire health system, also weakened by the losses among health workers and the peak of the flu campaign.

Now, 12% of the beds in the ward and 22% of those in the ICU are occupied by COVID patients, with percentages that are increasing rapidly and that are especially high in Catalonia (41%) and the Basque Country (32%). At the opposite pole, Extremadura (9.9%) and Galicia (6.6%) are the only communities that remain at a low risk level in terms of the occupation of their ICUs.

And especially the severity of this sixth wave will increase if it spreads among the elderly, more vulnerable to COVID-19 throughout the pandemic, and in unvaccinated people. When one is not immunized, the omicron variant is serious, especially as one ages.

The immunologist and researcher of the National Center for Cardiovascular Research (CNIC), Miguel Ángel del Pozo, recalls that people who are not vaccinated are more likely to suffer serious symptoms, so he considers that “they should not gamble” saying “I’m going to catch omicron to immunize me. ” On the contrary, this expert understands that omicron should be “a stimulus to vaccination,” as he has said in statements to the Efe agency.

Less risk in the elderly due to vaccines, but the incidence increases

The coronavirus has always been primed in the elderly. From the start of the pandemic to the end of the fifth wave, 36% of those infected over the age of 90 ended up in the hospital, according to reports from the Carlos III Health Institute (ISCIII). In this sixth wave, which began on October 14, that percentage has been cut in half, to 17.2%. Identical trends have occurred in the groups aged 80 to 89 years (those hospitalized decrease from 38% to 12.6%) and from 70 to 79 years (from 29% to 6.5%), according to data from the ISCIII up to the January 5.

But if the increase in infections continues to spread to the elderly, as is already happening, with incidence rates of around 1,000 cases in those over 70 years of age, a part will end up seriously admitted. Lethality is already taking off steadily in the group of people over 80 years of age, which has gone from an average of 17 deaths a day at the beginning of December to 30 a month later.

The impact of the coronavirus is also growing in nursing homes. Although vaccines have been decisive and in 2021 a fifth of those older than in 2020 (5,000 compared to almost 26,000) have died in these centers, infections in the last seven days have increased considerably, according to the Imserso. With data still provisional, it has gone from reporting more than 1,600 cases to more than 3,600, more than double, as it happened the previous week, when the infections jumped from 650 to more than 1,600. And although deaths are not increasing at the same speed, there is a clear upward trend.

The administration of the reinforcement doses, fundamental so that the cases do not get worse, advances. The booster dose has been given to 15.1 million people, 32% of Spaniards, but there are large pockets of the population still without getting a single dose of the vaccine.

There are 3.2 million people over the age of 12 who have not been vaccinated, which makes them a very vulnerable group to serious infection Among adults aged 30-39 years there is still 20% who have not received the vaccine, around 15% in the group aged 20-29 and one in ten adults aged 40-49, precisely the groups in which the cumulative incidence is higher.

And, despite the ‘call effect’ of the implementation of the COVID-19 passport, the percentage of vaccinated adults does not grow significantly. If the administration of first doses increases since the end of December, it is due to the incorporation of children from five to 11 years of age to the vaccination strategy.

However, classes in Primary will begin next Monday with less than a third of students aged 5 to 11 vaccinated with the first dose; just over a million of the 3.3 million students of that age in Spain. Two million children have yet to be given the first dose, which adds great uncertainty at the beginning of the school year, together with possible casualties among teachers and the management of outbreaks in classes, whose presence they intend to preserve. at all costs the Government and the autonomies. There is still a lot of January ahead.