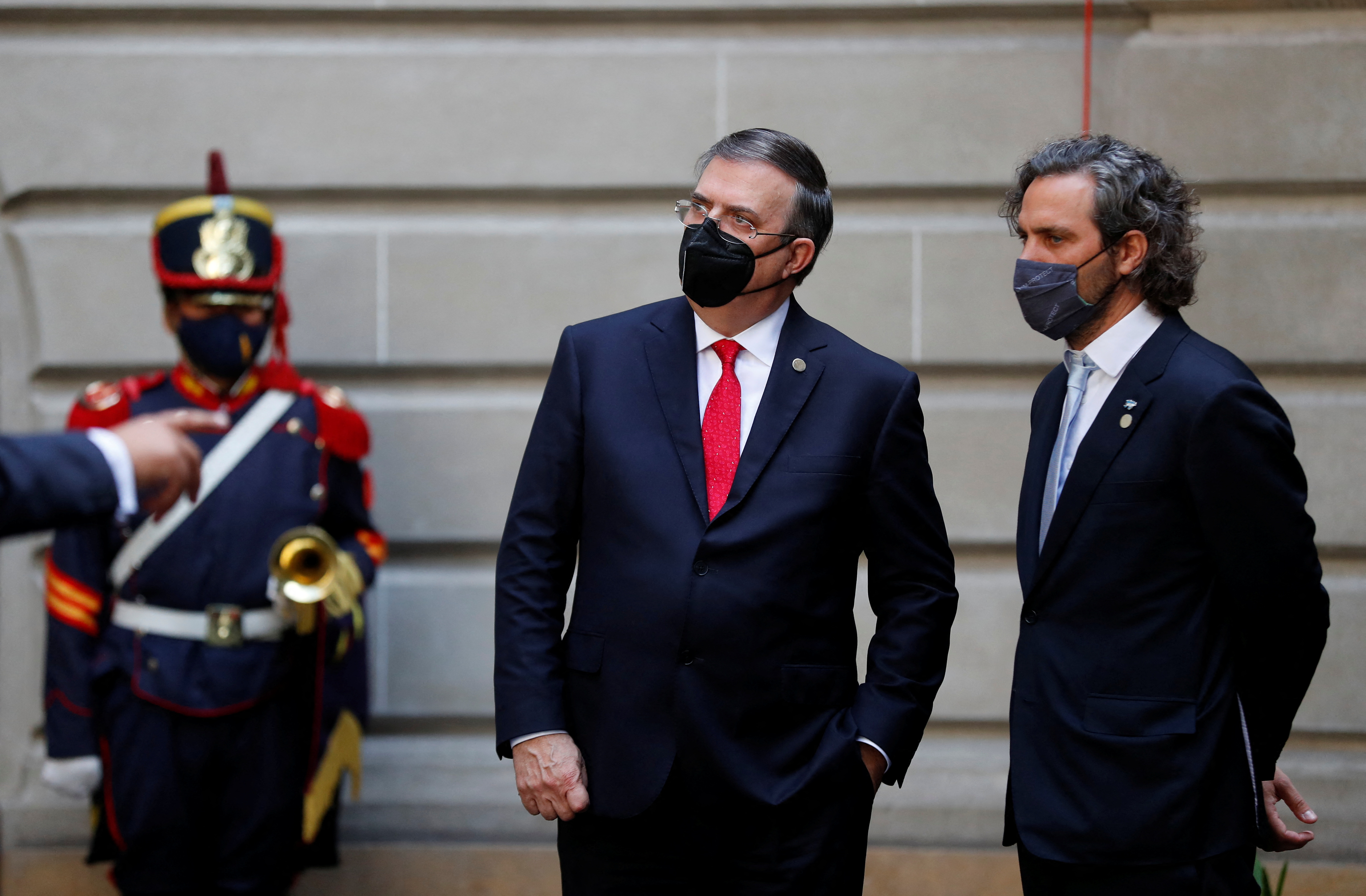 Mexico has transferred this Friday the baton of the pro tempore presidency of the Community of Latin American and Caribbean States (CELAC) to Argentina. It has been more than a formality. The succession speaks volumes for the strategic alliance that the two countries maintain in their effort to keep US influence in the region at bay. CELAC does not have among its partners the northern power or Canada, and when it was born 12 years ago, in a scenario of a majority of progressive governments, it was thought of as a regional counterweight to the Organization of American States (OAS). Tensions over the profile that the forum should have flew over the face-to-face meeting of foreign ministers held in Buenos Aires. While Venezuela, Nicaragua and Cuba lashed out at Washington, countries like Colombia warned that it would be “a great irresponsibility” to think that a stronger CELAC implies “burying the OAS.”

The president of Argentina, Alberto Fernández, closed the summit held at the Palacio San Martín, a French-style palace that is the seat of the Foreign Ministry in Buenos Aires. Fernández picked up the glove from the debate on the spirit of the forum. “CELAC was not born to oppose or confront other institutions, it was born as a forum in favor of ourselves, which always promoted consensus without exclusions,” he said in a speech that, unlike on other occasions, he read without improvised additions. Fernández did not name the OAS, as did the vice president and foreign minister of Colombia, Marta Lucía Ramírez, in a text read by a representative. While the rest of the foreign ministers focused their speeches on the need to join forces against covid-19, Ramírez warned that “we will always live in the same neighborhood of the United States and Canada, to whom it would seem that eagerly and without clarity of intentions, he wants to turn his back on the part of some in this organization ”.

Ramírez brought to Buenos Aires the voice of those governments most aligned with Washington. That is why he also recalled that the forum demands to expel those members who do not comply with the norms of democracy, “as is the case in at least three of the countries that are represented here,” he said. It was not necessary to name Venezuela, Nicaragua and Cuba.

CELAC is a forum for cooperation. He was born with 33 members, but today he has 32. Brazil excluded itself as soon as far-right Jair Bolsonaro came to the presidency, who considered it a group born to promote countries of the Bolivarian axis. There were no Brazilian representatives this Friday, but there were from the rest of the nations, even those not alienated with the left. In any case, the pro tempore presidency of Argentina guarantees the continuity of the profile that Mexico has given to CELAC.

The Government of Andrés Manuel López Obrador closes its pro tempore presidency with a tour of the Foreign Minister, Marcelo Ebrard, through South America. Ebrard’s trip had two priority political destinations: Santiago de Chile, to have a first contact with President Gabriel Boric and, of course, Buenos Aires, to take over from Alberto Fernández in the multilateral organization. The scale in Chile has been especially relevant: the country joins with Boric the progressive axis that Mexico intends to lead in the region, after years of right-wing governments. At the center of the Mexican diplomatic project is the consolidation of a progressive axis that takes advantage of Boric’s arrival and strengthens the sympathies with Argentina and Bolivia, among other countries, to open a “new stage” in representing the region to the world.

“The more divided we are, the less organized, the more difficult it will be to assert the interests and voice of Latin America and the Caribbean in the world,” Ebrard said at a press conference this week. If this year Luiz Inácio Lula da Silva wins the presidency of Brazil (although he has not yet formalized his candidacy, the PT leader is the favorite in all the polls against Bolsonaro), the new political map will be consummated.

Created in 2010 and driven by the previous wave of Latin American leftist governments more than a decade ago, CELAC later fell into a period of irrelevance that spanned years. Mexico assumed the presidency of an organism that was operationally dead and that no longer weighed in the region to reconvert it into a parallel field where it could vent the long-standing conflict that it maintains with the management of Luis Almagro in the Organization of American States (OAS), which is burdened with the historical weight of being under the control of the United States. In a mandate that lasted two years due to the pandemic, the Government of Andrés Manuel López Obrador was able to give a political nod to the south and organized last September a meeting of heads of state in which such dissimilar members sat at the table like the Venezuela of Nicolás Maduro or the Uruguay of Luis Lacalle Pou, in an encounter that was not immune to turbulence.

That meeting ended without a new pro tempore presidency, due to Nicaragua’s refusal to support Argentina. The Daniel Ortega regime charged Buenos Aires for a series of criticisms that the Casa Rosada had launched against the handling of the protests and the persecution of opponents in Managua. At that time, Nicaragua was heading for a presidential election that had Ortega as a candidate and imprisoned all opposition politicians with the possibility of victory. Broken the consensus that CELAC norms require for any decision, the replacement of Mexico had to wait until this Friday, when Nicaragua yielded to the gestures of rapprochement that the Argentine Foreign Ministry tried to unblock the situation.

“CELAC has to strengthen and make way regardless of what happens with the Organization of American States,” said Ebrard. In the official discourse, the Mexican Foreign Ministry spoke of putting politics aside to find coincidences in scientific and educational cooperation. Mexico defends as main advances the plans to achieve greater self-sufficiency in the fight against the pandemic, with projects for the regional production of vaccines and the exchange of technical information to facilitate access to treatments and medicines against the covid. A common fund for mitigation of natural disasters caused by climate change was also created, which will be operated by ECLAC from this year, as well as a Latin American space agency.

On the ground, they are discrete initiatives that, however, have served the double role that Mexico wants to assume in the continent’s diplomacy: as a reliable interlocutor for the United States and a leader among its Latin American allies, especially in the absence of Jair Bolsonaro’s Brazil. The arrival of the Fernández government seeks to maintain that momentum in the body, something that could hardly have been done if a country like the small Caribbean nation of Saint Vincent and the Grenadines arrived, which a few months ago raised its hand to take over. With Argentina in CELAC, Mexico is expected to focus on the Pacific Alliance, a body that it will preside over this year and that brings together Chile, Peru and Colombia, with the next addition of Ecuador.

Sign up here for the EL PAÍS América newsletter and receive all the information on current events in the region.