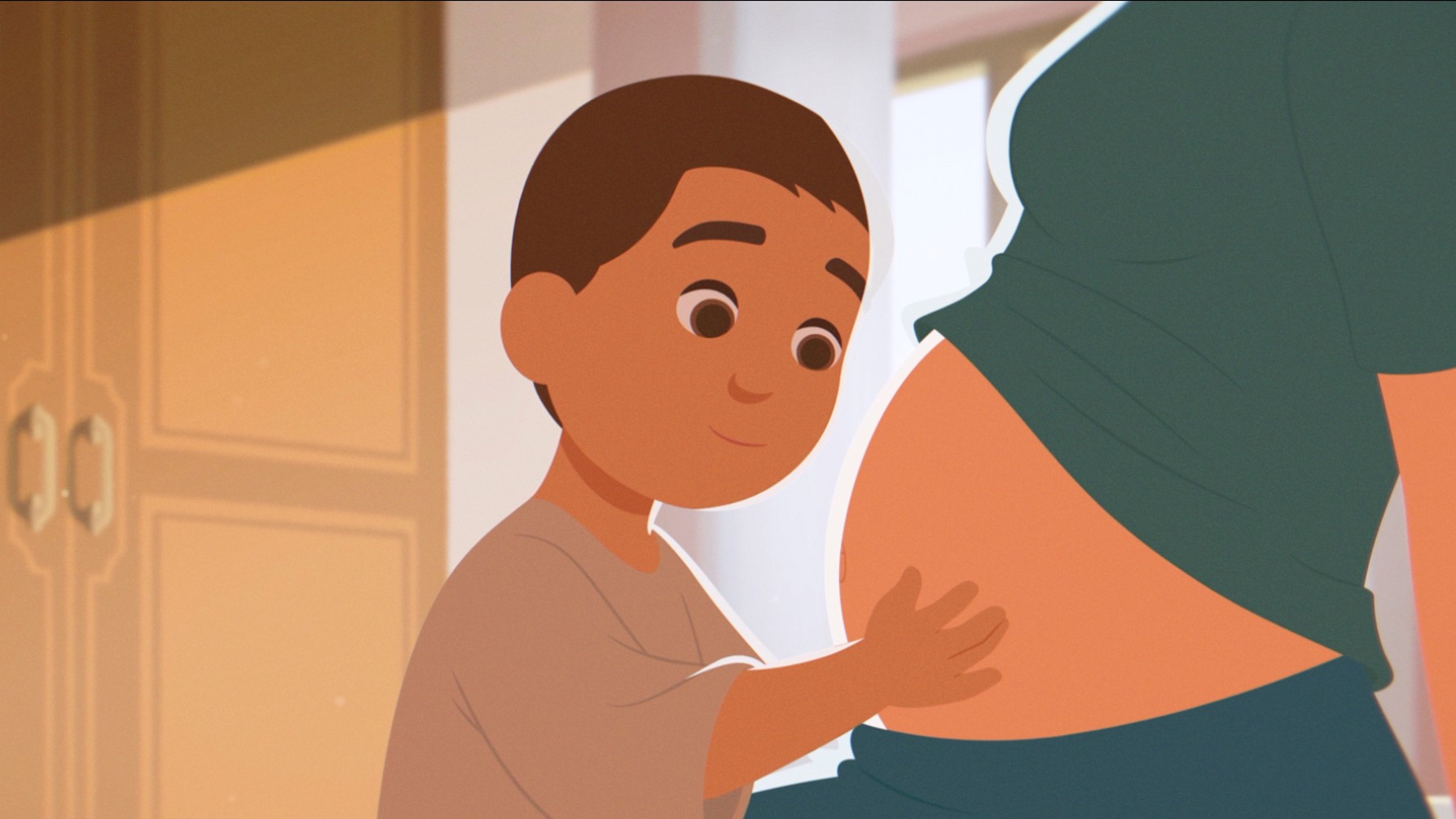 RTVE.es premieres online (you have it heading this news) the animated short film Born, nominated for the Goya Awards 2022. You can watch it for free for 24 hours, until tomorrow, January 5, at 9:00. The short tells the story of Carlos, a four-year-old boy who faces the emotional challenge of having a baby brother. A story that will touch your heart and that is Directed by Roberto Valle and produced by his brother Carlos (The chair of life, second), with whom we have spoken.

And the first thing we ask Roberto is where this short was born: “How does it feel to be a child and find out that you are going to have a baby brother? I never knew because I am that little brother, but I have always wanted to know. What’s more, I love the times when we’re innocent, strangers to knowledge, because it is precisely when we are closer to him. When the change is near and when you are finally aware is when the human being is truly human “.

“These two premises – Roberto continues – give rise to Born, which is literally creation. A story that deals with what exists in a contained state, oblivious to light, and which then comes out into the world as nature governs: the baby on the visual plane and the conscience of the protagonist child on the non-visual plane. I decided to face the development of the work devoid of knowledge, narrative and artistic, to thus become that child protagonist and be able to be really authentic in my work: I created myself to be able to create the story “.

A small story that deals with big issues

In its nine-minute duration, the short tells us about great issues, as Roberto tells us: “In Born topics such as love versus rejection or forgiveness versus pride, emotions (some) that appear for the first time in the life of the child protagonist. Also highlights family unity, the gift of belonging to a family and never feeling alone “.

But the short also talks about depopulated Spain: “Regarding the context,” says the director, “we chose life in a peaceful La Mancha town because we know it very well, it is where we were born and grew up, a place where time passes calmly, without haste, ideal for cultivating love and all good values. Talking about what is known is the only way to contribute as much value as possible. “

Finally, the short also talks about duality, as Roberto explains: “All in Born revolves around duality, from the main conflict to the use of color or the realization (composition and frames). This is how the child protagonist perceives the world and thus is transferred to the viewer (child or adult). We tend to binary value everything that surrounds us and happens, as if there were only two options and you had to choose one. Even if Born it states that reality is different, it uses this dual language to facilitate communication between the story and the viewer “.

The protagonist of the short is Carlos, a 4-year-old boy who faces the first challenge of his life, the arrival of a little brother. “Of course, the child is inspired by my brother Carlos,” Roberto confesses. He is still small, innocent and curious, so a news as special as the arrival of a little brother implies a total turn in his life. Despite having very good feelings, not everything is as he imagined, and he must learn to accept changes and manage emotions very well. “

Also noteworthy is the short narrative rhythm, which surprises us at this time where we are constantly bombarded with images. “My intention -assures Roberto-, it was always to achieve a slow, calm and breathing narration, because only in this way can life be appreciated. Both the type of framing and the editing rhythm attend to the pulse and emotions felt by the characters, varying between open and closed shots or between a contemplative and frenetic tempo. A) Yes, achieving such a human animation was not easy because it was not only about being realistic, but about adapting that realism to the minimalism of the style, we had to contain the animation without losing its essence “.

Hence, the figures of the characters are not delimited by lines either. “Born It is the world of a child, where there are no limits (strokes) -assures Roberto-, everything is in contact with everything and the colors are the ones who give identity and meaning. Choosing this style has its origin in the very concept that gives life to the story: showing only what is essential and pure. Adapt the shape to the background “.

Your sources of inspiration

Regarding his sources of inspiration, Roberto confesses that: “The Tree of Life, The Red Turtle The The Tale of Princess Kaguya are titles that have shown special attention for birth, childhood and change. Moments that they treat with affection, delicacy and without any rush, as they require it “.

“Aesthetically,” Roberto continues, “in the same line as Fovism, we seek an attractive plasticity to the eyes that does not cease to be real, organic, and that spoke like this of life, of continuous change. Roof of the World Y Bu’s Journey they were our greatest references on an aesthetic level “.

The music is by Lucas Vidal and Morgana Acevedo

We want to highlight the artistic and technical team of the short, starting with the composers of the soundtrack, Lucas Vidal (winner of two Goyas and an Emmy) and Morgana Acevedo. “Counting on his talent has meant for us to fulfill a dream and has meant a great leap in quality for production. We met Lucas a few years ago in a master class and we were captivated by his passion for music and his enormous talent. When he won two Goyas, he gave a speech that touched us very deeply and we were clear that we wanted to work with him. We have been fortunate to be able to do it in Born, because he loved the project, and we have also had his regular partner, the young composer Morgana Acevedo, who has composed the music for the series Elite, also with Lucas. We did not know her, but it has been a real discovery and together they have made unforgettable music “.

We also highlight the level of the animators, among which there are great female artists: “Much of the team of the short film comes from working on great animated films like Klaus, Buñuel in the labyrinth of the turtles The Psychonauts, the first Oscar Nominee and the other two Goya winners. From the beginning we seek balance between women and men and also we are committed to combining experience and youth in the teams “.

“The talent of Cristina Moreda and Carmen Gallardo, art director and production director, who are among the youngest, perfectly combines with the experience of Julián Lominchar or Carlos León, two seasoned 2D animators who have been in the industry for over 15 years. And so on until reaching a team made up of more than 30 people who are great professionals but above all great people. The confidence of the Basque producer Ivan Miñambres, from the production company UniKo, and from Nestor Lopez, from Filmakers Monkeys, has been instrumental in financing and producing this project. I am proud that three small producers, the three Spanish, have come together to make a big short “.

This year there are great competitors

Winning the Goya will not be easy, because this year the nominated shorts are all stupendous (Selection process, from Carla Pereira; The Monkey, from Lorenzo Degl’Innocenti Y Xosé Zapata; Y Umbrellas, from Alvaro Robles Y José Prats)

“The level of our competitors is very high, how could it be otherwise – confesses Carlos -. I think this year there really is a lot of level and that shows once again the good moment in which animation is in Spain. The best news for the industry is that the quality of the nominees is so good. “

But the Valle brothers are not resting on their laurels and are already preparing their next projects, as Carlos tells us: “Among our following projects is an animated film whose germ is Born. It is currently in development and we cannot tell many details yet, but it will share the same universe of Born and it will have a background very similar to the one we already showed in “La Silla de la Vida”, our first short film. On the other hand, we are working on the new Pablo Berger film, Robot Dreams, within the animation production department. And we also plan to shoot a live shot short, because we love the live shot and its possibilities. We think about creating stories, beyond the fact that they can be carried out in animation or in real image “.