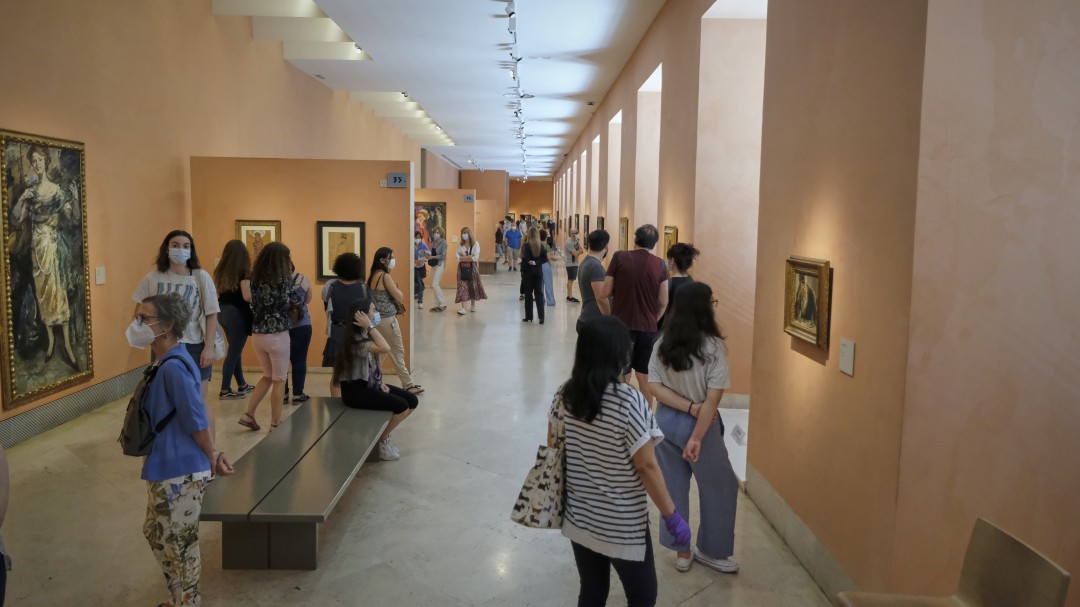 Spanish museums are slowly recovering from the consequences of the pandemic. In 2021, the main museums, located in Madrid, have seen how the number of visits has grown compared to 2020, a year of closing doors and reduced capacity due to the Coronavirus, where international tourism has not yet been fully reactivated. The box office is currently important for state-owned museums, since it is one of the ways to guarantee the sustainability of museums, with important challenges at this time, such as digitization or its adaptation to the new demands of society on issues such as equality or sustainability.

The comeback until reaching the figures before the pandemic is not easy, Miguel Falomir, director of the Prado Museum, already warned a few days ago. It won’t be until 2023 until the numbers catch up. All in all, the rise in the number of visitors is good news. The Prado collections have been visited by a total of
1,175,296 people this year. Most of these visitors are from the two Madrid venues, the Villanueva building and the Jerónimos building. Only 48,655 have done so in the different Spanish towns where the Prado has been present through temporary exhibitions.

The Prado Museum opened its doors in 2021 for 353 days (it only remained
closed from January 9 to 17 due to the Filomena snowstorm) and has obtained a daily average of 3,192 visitors. The busiest day was December 7, in the middle of the bridge and before the omicron explosion, a new variant of the coronavirus that has raised the incidence of contagion in Madrid and Spain to maximum. These visits represent income of 7,193,636.73 euros from the sale of tickets, an amount that has grown by just over three million compared to the previous year’s income.. 47.23% of the total public agreed by paying their ticket, in general, reduced or other prices, and 52.77% accessed for free.

The public profile of this museum is still mostly young (48% between 18 and 34 years old) and female (58.6%), and although since the COVID-19 pandemic began, more than half of the influx remain inhabitants of the Community of Madrid, in 2021 there has already been a progressive increase in visitors from the rest of Spain (20.2%) and foreign visitors (26.1%).

The Reina Sofía has undergone a reorganization of its permanent exhibition this year. Communicating vessels. Collection 1881-2021, is made up of nearly 2,000 works created from the origin of modernity at the end of the 19th century to the most current art, with around 70% of works being shown for the first time in the Museum Collection . Its incorporation has allowed addressing new themes, such as the contemporary condition of emigration, colonialism, ecology, the 15-M movement or gender identity, as well as significantly increasing the presence of women artists, accentuating the role of women. photography and cinema, and include architecture in the exhibition discourse.

The temporary exhibitions that have had a greater reception from the public have been Marginalias, the largest retrospective dedicated to the American artist Ida Applebroog Y troubadour machinesby the Spanish Pedro G. Romero. The influx of visitors to the exhibitions of the Argentine artist of Swiss origin has also been notable. Vivian Suter, which brings together nearly 500 paintings in the Palacio de Velázquez del Retiro and that of the German photographer Michael Schmidt, which can still be seen in the first months of 2022.

The Thyssen also improves in 2021, the year in which the centenary of the baron’s birth has been commemorated. Thyssen-Bornemisza. The museum has received a total of 671,078 visitors, a figure that represents an increase of 97 percent compared to 2020, when only 341,008 visitors were counted, and which remains at 65% of those received in 2019, the previous year. to the pandemic in which
exceeded one million visitors (1,034,873). Exhibitions like Georgia O’Keeffe o La Magritte machine They have been a great success with the public, according to the museum, with 110,050 and 170,182 visitors, respectively. By the way, the exhibition dedicated to the surrealist artist will remain open until January 30, 2022. It is one of the claims of Thyssen in addition to the return of Mata Mua, the painting by Gauguin loaned to Andorra and which will return after the agreement reached between the baroness and the government to maintain the permanent collection in Spain.

The Royal Sites, Royal Patronages, gardens and forests of National Heritage have also had an increase, although international tourism has not yet returned to normality. They received a total of 3,816,223 visits in 2021.

Outside Madrid, the Guggeniem Museum Bilbao received a total of 530,967 visitors in 2021, which represents 6% more than expected due, above all, to the increase in the public in the second part of the year when the health situation caused by Covid-19 improved. In the economic section, and thanks to this rebound in visitors and activity, the Bilbao exhibition center managed to raise its level of self-financing to 62% in 2021, although it is still far from the prepandemic percentage, when it reached 71% and received figures visitors over a million people, double that of last year.

The last twelve months have been marked by restrictions, due to the incidence of Covid-19. In a first scenario, from January to May 2021, all museum capacity was limited to 50 percent, except for the days when the capital was affected by the snow storm Filomena. Then, from May to October, the permanent collection and temporary exhibition rooms on floor -1 increased their capacity to 75%, while the exhibition rooms on the ground floor continued to 50%. From then on, and until now, full capacity has been recovered.