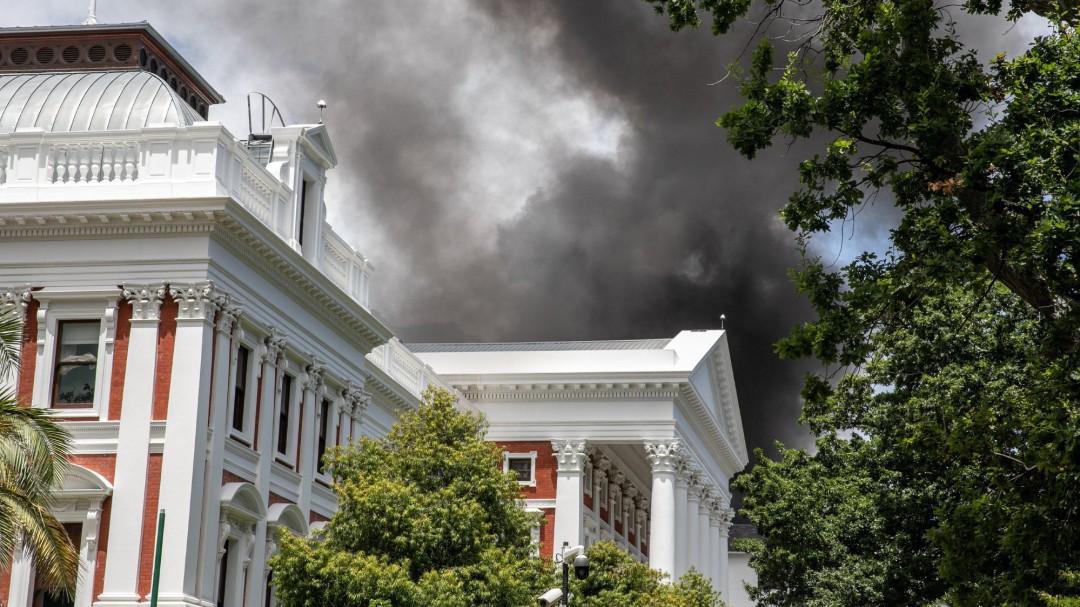 The flames were rekindled today in the buildings of the Parliament of South Africa due to the reactivation of sources that still remained to be extinguished from the devastating fire declared yesterday, Sunday, the emergency services confirmed. Although the firefighters believed they had the fire under control in the morning, the flames re-emerged this afternoon and were visible on the roof of the National Assembly (lower house).

“The Fire and Rescue Service confirms that the fire in Parliament has been rekindled,” Jermaine Carelse, spokesman for this emergency organization in Cape Town (southwest), the city where the historic parliamentary buildings are located, told the media.

Shortly before, the South African Minister of Public Works and Infrastructure, Patricia de Lille, and the President of the National Assembly, Nosiviwe Mapisa-Nqakula, had explained at a press conference that the firefighters were still working to extinguish the last outbreaks and that temperatures inside buildings hovered around 100 degrees.

For his part, the president of the National Council of Provinces (the South African Senate), Amos Masondo, had confirmed that the fire had caused the “complete burning of the chamber of the National Assembly” and of several offices in that building, as well as part of the adjoining blocks. The teams of engineers and specialists deployed in the area expect to have a preliminary report on the circumstances of the fire by next Friday, De Lille explained.

At the moment there is one person arrested for his alleged connection to the fire: it is a 49-year-old man who was seen by the security services inside the Parliament premises and who was arrested with stolen objects.

The detainee will appear tomorrow, Tuesday, in court, accused of trespassing, robbery and arson in a place of national importance, as detailed last night by the security forces in a statement. According to information gathered by the local press, the alleged criminal entered the buildings through a window.

Authorities believe the fire started in the oldest building on the National Assembly compound (the “Old Assembly”), whose construction was completed in 1884, and then spread to the newer wing that houses the current lower house and its offices. Emergency crews were notified of the fire around 0600 local time (0400 GMT) on Sunday, but the causes of the fire are still unknown.

The circumstances that caused, for example, the fire sensors to take time to respond are also being investigated, as Minister De Lille had revealed this Sunday. The sprinklers didn’t work either because the water valve was closed.

De Lille also confirmed today that the security cameras were working properly in the early morning of the event and that the Police were in charge of controlling them. This is the second fire that the South African legislative headquarters has suffered in the last year, after the fire in March 2021. After that incident, a report of recommendations was prepared to improve the deficient security measures of the building.