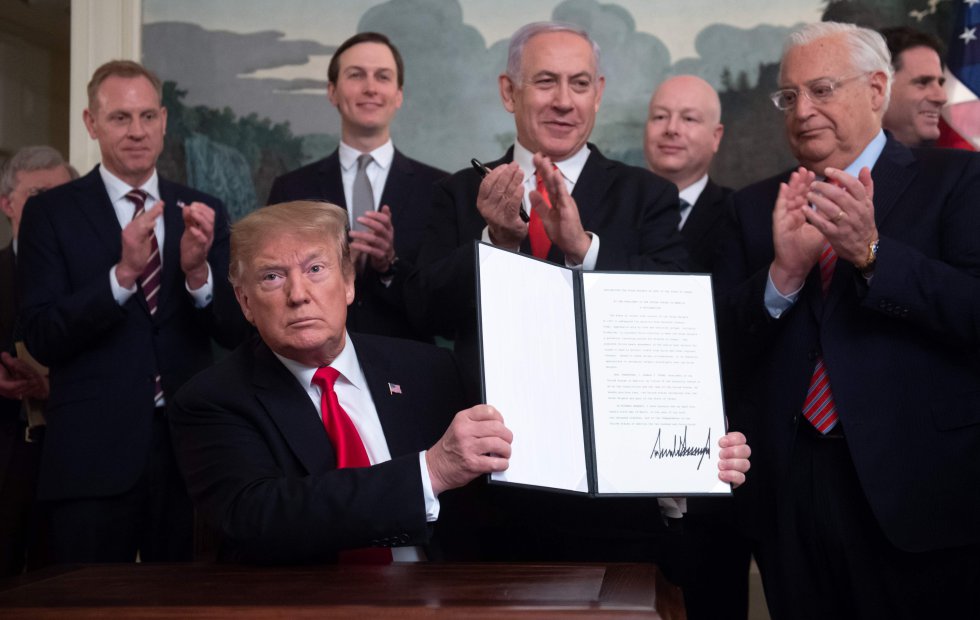 No president of the United States has made such an effective contribution to the expansionist projects of the State of Israel as Donald Trump. His low appreciation for international legality and multilateral agreements allowed him to take steps that no previous president would have taken, such as breaking relations with the Palestinian Authority, withdrawing humanitarian aid to Palestinian refugees, moving his country’s embassy to Jerusalem – and, above all, to recognize the Holy City as the capital of Israel – declare the compatibility with international law of the Israeli occupation of the West Bank and even affirm Israeli sovereignty over the Golan Heights, a thousand mountainous kilometers, internationally recognized as of Syrian sovereignty, conquered by arms in 1967 and located just 60 kilometers from Damascus.

Thanks to the concerted action of two ultra-conservative leaders, Trump and Netanyahu, the peace process initiated with the 1993 Oslo accords for the recognition of a Palestinian state was more than damaged, the Zionist state managed to open diplomatic relations with the United Arab Emirates, Bahrain, Sudan and Morocco and the White House announced in March 2019, during an official visit of the Israeli prime minister to Washington, the recognition of the Israeli annexation of the Golan. In gratitude, the Israeli ruler approved in June 2020 the construction of a new settlement in the mountainous region to house 300 Israeli families with the name of Ramat Trump (Trump Heights) and was photographed with the United States ambassador and their respective handcuffs in front of a huge sign with such a denomination in Hebrew and English. The Trump Heights were not an anecdote during the electoral campaign resulting from Trump’s delusional foreign policy but a premonition.

Trump always acted hand in hand with Netanyahu, but the effects of his foreign policy have not been nullified either by the Biden presidency or by the new Israeli government of Naftali Bennett. The new Cabinet has just approved a € 280 million plan to build 13,000 new homes in the next five years, double the Israeli population in the Golan from the current 26,000 inhabitants to 50,000, equip the region with communications, tourism infrastructure and turn it into the largest solar energy park in Israel. All this, of course, without consulting or attending to the interests of the 25,000 Druze Golanis, most of them Syrian nationals, or to the categorical resolution 497 of the United Nations Security Council, which already in 1981 declared the annexation as “null, without value or legal effect on the international plane ”. In the expansive plans on the Golan, the continuing attitude of Joe Biden towards the Middle East and the latest Trump decisions has weighed, with the exception, fortunately, of the resumption of relations with the Palestinian Authority.

If there is not at least a clear nuance of the unilateralist policy practiced by Trump and Netanyahu, the ambiguity of the message that Washington emits in the direction of the internationally reprehensible expansionist instincts of Putin towards Ukraine and Xi Jinping towards Taiwan will have very negative consequences. . At least the European Union and its member countries should openly oppose these Israeli plans that violate international legality at the expense of fragmented Syria and in civil war.