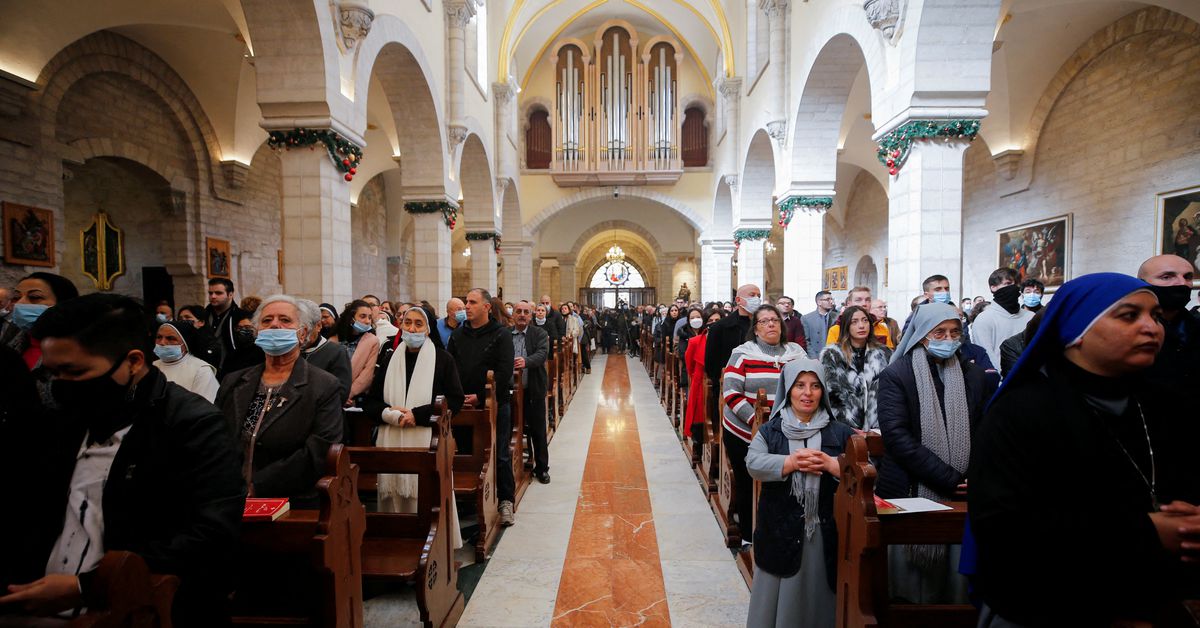 BETHLEHEM, Dec 25 (Reuters) – The bells of Bethlehem rang out under grey skies on Christmas morning across streets whose closed pastel or green shutters were like an Advent calendar that nobody had turned up to open.

Shopkeepers and hotel owners in the Palestinian city reported far lower business than the years before coronavirus closures halted the arrival of wealthy foreign tourists, devastating the economy of the traditional birthplace of Jesus.

In Manger Square, hundreds of Christians – mostly those who live, work or study in Israel and the occupied West Bank – gathered near the tree and crib to sing carols and bring some cheer to the scene outside the Church of the Nativity.

But Joseph Giacaman, whose family has sold souvenirs around the square for a century, said business was around 2% of pre-pandemic years. “We were closed until three weeks ago. I have sold maybe two or three olive wood cribs. In normal years, we’d sell three or four each day throughout the year,” he said.

The back streets were virtually empty.

Star Street had been renovated in recent years in the aim of drawing crowds, but here as elsewhere the Omicron variant dashed those hopes in November when Israel began closing its borders.

Earlier in December, Bethlehem mayor Anton Salman had sought to bolster morale by walking along the cobbled street at night, shaking hands of those selling mulled wine and olive wood carvings. But the market’s opening could not continue its momentum with no foreign coach parties to sell to.

And in the nearby Nativity Hotel, receptionist Victor Zeidan said he was doing a 12-hour shift at lower pay to get a rare day’s work checking in Palestinian Christian and Filipino care workers who briefly boosted occupancy.

“I haven’t even celebrated this year, I didn’t get much work before so now I am taking the chance,” he said.

Jerise Qumsieh, of the Palestinian Ministry of Tourism and Antiquities, told Reuters that this year was better than last because there were at least some domestic visitors compared with the tighter restrictions of 2020, but that foreign tourism was “zero”.

Nevertheless, in the early hours of Saturday the Latin Patriarch of Jerusalem, Pierbattista Pizzaballa, urged a reduced midnight mass congregation to search for hope.

“In this time of health emergency and prolonged political emergency, many different voices are heard in families: some undermine confidence, take away hope, extinguish love; others, however, are more encouraging,” he said.

“We need to seek and find the voice that leads us to Jesus and to salvation, that opens hearts to hope.”