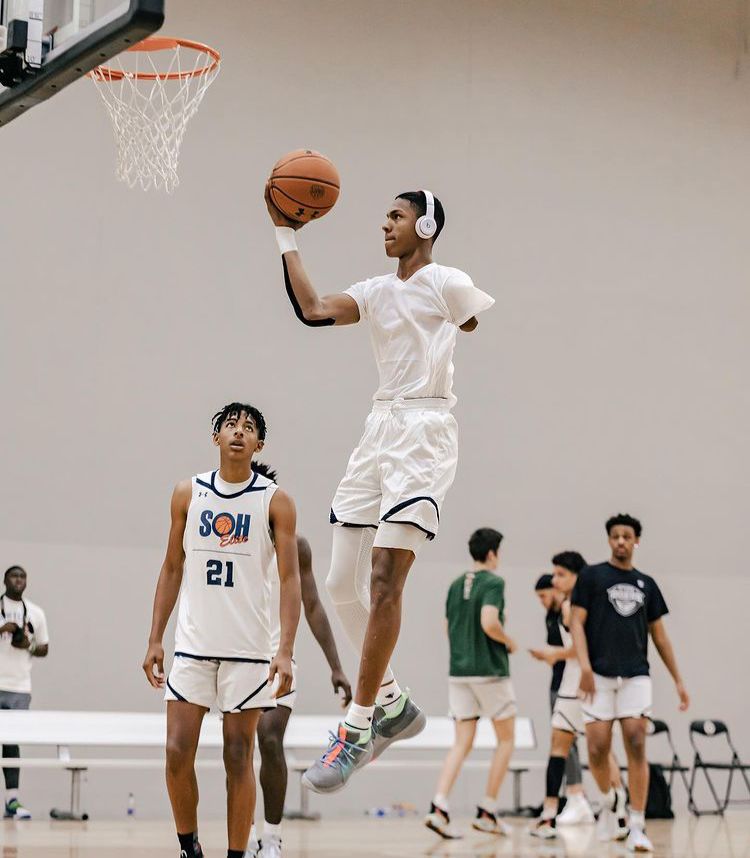 He is Hansel Enmanuel Donato and they call him Kikimita, short for his father’s nickname. Born in Santo Domingo 17 years ago, he plays basketball at Life Christian Academy in Florida and dreams of one day competing in the NBA. He is a special player. When he was six years old, he lost his left arm. It happened when he was playing a traditional game with his friends in Los Mina, one of the poorest neighborhoods in Santo Domingo, and a concrete wall fell on him. Doctors had to amputate his arm above the elbow.

His father, Hansel Salvador, played basketball on a professional team. The serious accident and the amputation of his arm did not prevent Enmanuel from following in his footsteps, and with astonishing success despite his physical limitation. “My father inspired me. He always took me to his tournaments. I played basketball since I was five years old. My idols are Kevin Durant and LeBron James, “he explains. During his first year in high school he has averaged 26 points, 11 rebounds and 7 assists and last weekend he won a dunk contest at City Palms, Florida.

The accident in which he lost his arm happened while his father was playing a street game. “My life fell apart. I was the one with him and when they had to amputate his arm, I felt like it was all over. But God grabbed us and led us down this path ”, now proudly affirms Hansel Salvador.

The aftermath was terrible. Enmanuel not only lost his arm. “I didn’t want to do anything. I couldn’t tie my shoelaces, or have a glass of water, ”he laments. But he was recovering, began to practice and stand out for his handling of the ball and his ability to score despite playing only with his right arm. And he took a firm conviction to move forward: “Disability is nothing, it happens to anyone. You have to keep going and never give up. Never look back. It is difficult to recover and it is frustrating. But God and the dream of being like my dad inspired me ”.

His father, in the first instance, did not want his son to continue playing basketball. “He was afraid that they could hit him, that he could get hurt and more when he began to stand out and play with older and more physically made players,” he says. Videos about their evolutions went viral. They drew the attention, among others, of Moises Michael Cruz, one of the coaches of the Life Christan Academy. “There are many players with two hands and two arms who cannot do everything that he is doing on the court,” says Cruz. He proposed to study at the institute and play on his team.

Kikimita was 1.93 and 16 years old when he immigrated to Florida in 2020. “Since he was a minor, I had to go with him. He says it will be an NBA, but I just hope they can see him and I know that he will go far because of his great dedication, “his father Hansel Salvador told the Dominican newspaper two years ago. Listin Diario. Enmanuel is now 1.96. He is an explosive player, with great jumping ability, skillful and with good ball handling. Willpower, evolution as a player and the ability to overcome his problems with English changed his father’s initial opinion and reluctance. “You are going to go as far as you want. You haven’t looked at what a limitation is. Once I was your idol, but you ended up being my idol, my teacher, because of that desire for life. I know that one day you will thank me for how strong and demanding I have been with you, “he told her from a distance on a Dominican television program.

Kikimita received a scholarship proposal in August at Tennessee State University, the top division of the (NCAA). “I don’t put limits on myself, and whatever you say I can’t do … I’ll do three times better,” he challenges. And he concludes: “I want people to see me as a great player, talented like many. Not because of my disability ”.