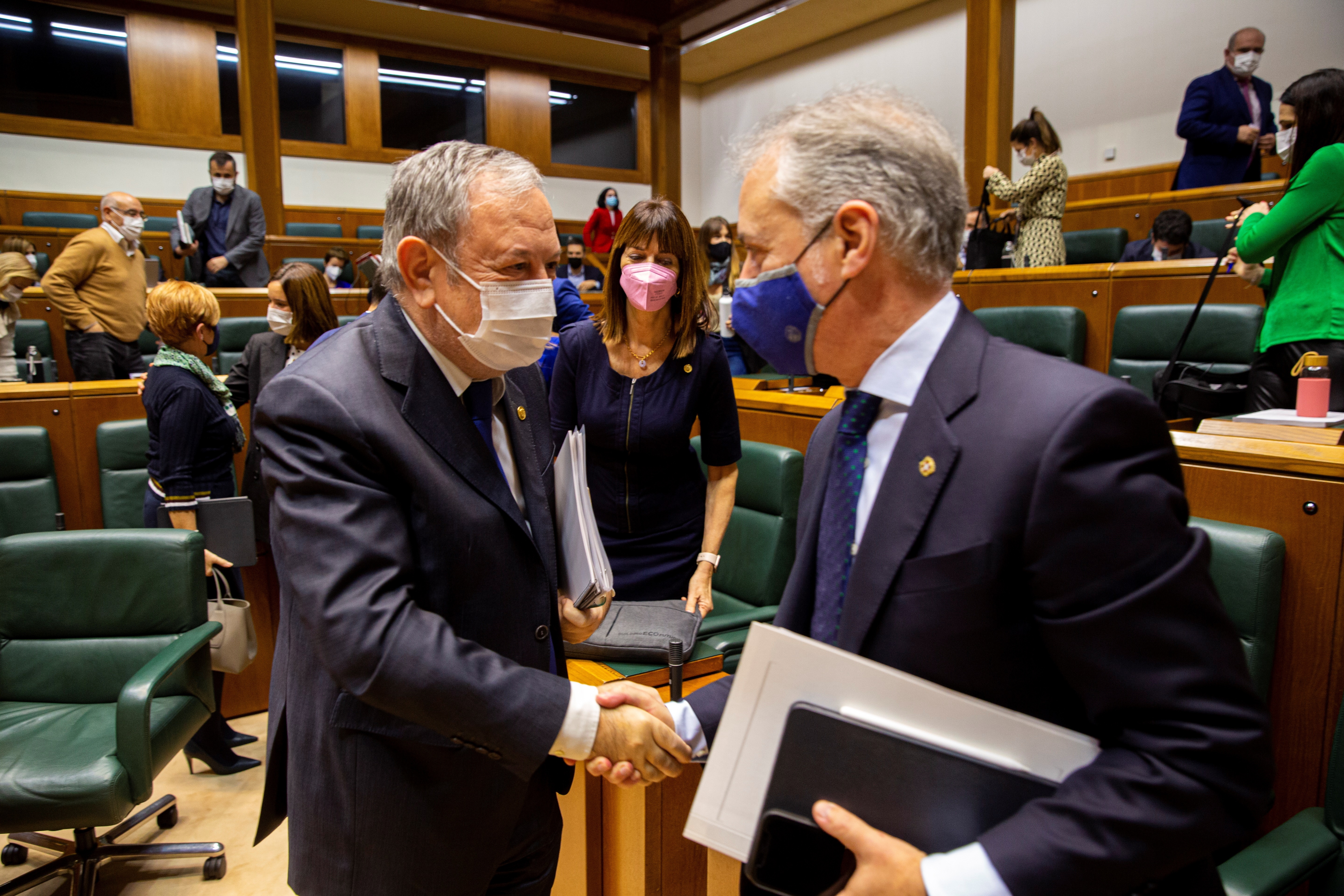 The Basque Government already has budgets for 2022. They are the largest in its history and the ones that have so far obtained the most support from the legislature with only eleven seats against the 75 in the Chamber. The Parliament of Vitoria approved them this Thursday with the support of the 41 seats of PNV and PSE-EE, the abstention of the 21 of EH Bildu and the 11 votes against Elkarrekin Podemos-IU, PP + Cs and Grupo Mixto- Vox -two deputies were missing-. The Executive will be able to spend 13,107 million euros, an increase of 694 million, that is, 6% more than last year -excluding amortizations, the TAV and the Bilbao South Bypass-. The budget includes investments worth 1,605 million euros, with an increase of 50% compared to 2021. In addition, 77% of the planned expenditure corresponds to social policies. By department, the bulk of public spending is distributed between the departments of Health (4,352 million euros) and Education (3,333 million euros) with an increase in financing for health investments of 37 million euros, to 106.7 million . Spending on vaccines grows to 19.2 million euros, five million more while spending on pharmacy remains stable.

For Elkarrekin Podemos, the 2022 Budgets consolidate the “cuts” in areas such as health and social policies, despite the “makeup” with which, as he has said, the Executive intends to hide them. Last year they agreed on the accounts with the Basque Government. This has reproached EH Bildu that, with his abstention, “he is protecting the cuts and the enormous limitations” of the budgets of Euskadi. Spokesperson Miren Gorrotxategi has been very critical of the treatment of public health in regional accounts and, by extension, with the government’s management of the pandemic. In this way, he has denounced that the budgets “consolidate the lack of investment in health, the high rates of temporary employment and inaction in the face of the collapse of Primary Care.” In fact, he has even said that the Basque Government could have as an “example” the health policy of the president of the Community of Madrid, Isabel Díaz Ayuso.

The rest of the opposition believes that the accounts are more of the same. Luis Gordillo of PP + Cs has criticized that these assumptions “follow the line of the previous ones and repeat their mistakes and deficiencies”, in such a way that they will leave Euskadi “disarmed in the face of the challenges that society must face”. His group submitted about 1,500 partial amendments that have been overthrown. The Parliamentarian of the Mixed-Vox Group, Amaia Martínez, has rejected them because she believes that they are budgets “based on the construction of a Basque nation independent of Spain.”

The 21 EH Bildu parliamentarians abstained because their contributions provide a better response to the problems of Basque citizens. The agreement has mobilized items worth 176 million and consists of a “political agreement on R + D + I that represents an amount of 77 million.” Despite everything, the EH Bildu parliamentarian, Nerea Kortajarena, has denounced that the Government acts “like a headless chicken” in the management of the pandemic. “The agreement opens doors that have remained closed until now,” added the EH Bildu spokeswoman.

For the PNV these budgets are “ambitious, investors; and very important for the amount, but above all for the success of its destination ”. Its spokesperson, Itxaso Berrojalbiz, has valued the agreement reached with EH Bildu, underlining that both parties have “parked” what separated them, and that “what was good for Euskadi has been incorporated”. “It has been a sincere exercise in dialogue and understanding with positive results. Its government partner, the PSE, has highlighted the increase in money allocated to public policies, the more than 1,600 million in investment, the “firm commitment” to R&D, the eight out of ten euros allocated to social spending, maintenance of the covid program in Health and Education, and the “unequivocal” commitment to the gender perspective. Its spokesperson, Sonia Pérez, has valued that the accounts come out with 80% of the Basque Chamber. “We are glad to have reached, through dialogue and negotiation, an agreement with the main opposition group, EH Bildu, which further reinforces this budget project,” he stated.