Jose Ignacio Barinaga, owner of the Verter Recycling company, manager of the Zaldibar landfill that collapsed almost two years ago, causing the death of two of its workers -Joaquín Beltrán and Alberto Sololuze-, and the chief engineer of that facility, Juan Etxebarria, have gone this morning to the Durango Court, but have invoked their right not to testify before the judge.

Barinaga was summoned to testify as a defendant in the procedure for a possible crime against the environment and public health, which is being instructed in the Durango court, Etxebarria and the manager of the company also appear as investigated in the case, Arrate Bilbao, which communicated last Friday to the court that he had contracted covid, so his statement has been postponed.

The platform formed by Ekologistak Martxan and the Charter of Social Rights of Euskal Herria are represented in this case as a popular accusation.

His lawyer, Carlos Alonso, has indicated to the media that the process is still in the investigation phase, despite the fact that almost two years have passed since on February 6, 2020, the landfill collapsed and suffered an avalanche of tons of waste, which caused the death of Alberto Sololuze and Joaquín Beltrán.

Alonso explained that the two people investigated for these events who have come to testify have opted for the strategy of not testifying and that a date should be set for the Bilbao statement.

In addition, you have indicated that you have requested an expert report to the special environment unit of the Office of the Attorney General of the State, regarding all the information that is in files that already occupy 15 volumes, and the appointment of a judicial appointment expert will also be made, who will prepare another report.

The investigation on this landfill will continue and the documents related to the work of search for corpses of the two people who were buried, and the subsequent works to settle the landfill and secure the land.

“It’s unpredictable” determine when the investigation will end since the Public Prosecutor’s Office and the popular prosecution have asked to extend the term for the investigation that initially ended in January, due to the complexity of the case. 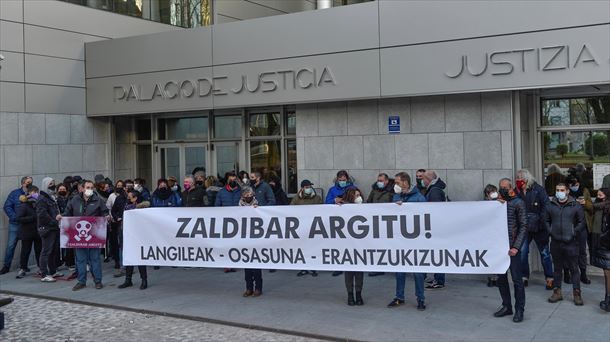 Protest of the Zaldibar Argitu platform and the Charter of Social Rights of Euskal Herria. Photo: EFE

Minutes before the trial, a concentration before the gates of the Court, summoned by the Charter of Social Rights of Euskal Herria and the Zaldibar Argitu Platform, to demand that debug responsibilities by the detachment of the landfill.

The representative of Zaldibar Argitu Gaizka Zabarte He has pointed out that in the judicial procedure there should not only be those responsible for the owner company, but also for the Basque institutions, because “without a legal framework that would allow their actions, the detachment would not have occurred.”

The Penal procedure due to the death of the two workers, it was closed last summer with a agreement between the Prosecutor’s Office and the accused, who avoided entering prison and compensated the families of the deceased.