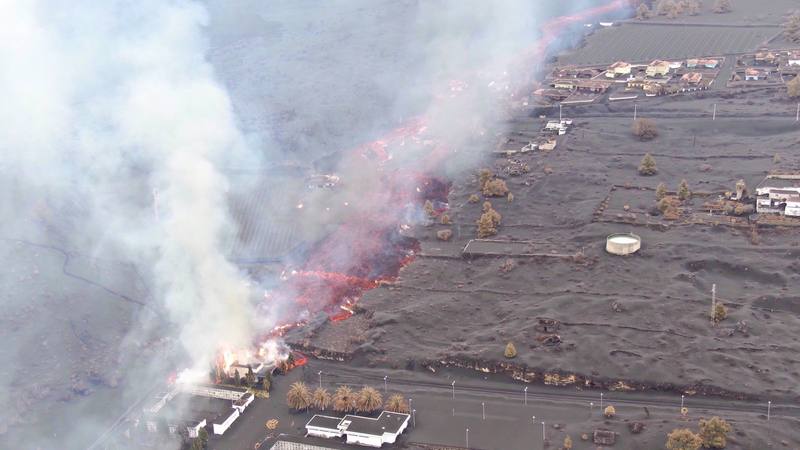 The Cumbre Vieja volcano has experienced a sudden pulse in one of its eruptive mouths early this Thursday from which a huge lava fountain. This material has begun to flow down the southwest slope of the main cone, generating a new stream that has buried the cemetery and the Las Manchas photovoltaic plant until it reaches the Aniceto interior road, where runs parallel to wash ten.

The technical director of the Special Plan for Protection against Volcanic Risk of the Canary Islands (Pevolca), Miguel Ángel Morcuende, has affirmed that this new lava flow is “bad news” because the new river of molten rock runs through areas of scattered hamlets and lands of tillage “not trodden” previously.

Despite its rapid initial progress, this new wash has slowed down by becoming more viscous as a result of the material that has dragged its way through areas of high urban concentration, which has slowed it down to about 25 meters per hour. Scientists and technicians are monitoring this flow because “it is worrying”, since it begins to enter an area of ​​steep slope.

In addition, the scientific spokesperson for Pevolca, Carmen López, has verified a increased emission rate with an increase in the ramification of lava channels and overflows that affect the area located between flows four and seven and that surround the northeast of Todoque mountain, in line five.

All this sudden lava pulse could be one more sign of the eruption degassing process, according to volcanologists, who have also confirmed the appearance of a new lava-emitting center south of the main cone, from where the volcanic material advances at about 600 meters per hour, as calculated by the Volcanological Institute of the Canary Islands (Involcan).

Alert situation due to accumulation of rains

The Government of the Canary Islands has declared the alert situation for rains in the east of La Palma, as well as in La Gomera and north and the metropolitan area of ​​Tenerife, starting at 9:00 on Friday. Are anticipated heavy rains that can reach 30 mm in an hour.

The volcanic situation may make possible the formation of mud flows in areas of strong runoff when the materials emitted during the eruption mix with the water and form rivers that move downhill. The rains can remobilize the materials deposited in the areas affected by the eruption and slide the mud flows through the natural slope of the land.

La Palma faces rain and ash: “When it gets wet it weighs much more”

In this sense, the Pevolca advises avoid road trips and if necessary, drive with caution and do not cross areas that could be flooded. The communication channels established by the authorities must be used and do not circulate in the areas near the volcano where there are accumulations of material (ash deposits and pyroclasts). In addition, the town hall of La Palma has road access to the south of the island is prohibited.

Neither should the vehicle be parked in the channel of ravines, or walk through ravines, valleys, natural and artificial channels, or at the foot of steep slopes. In case of being surprised by a runoff or mud flow, the authorities recommend taking shelter in a high place.

The airport continues without activity despite being operational

The cleaning and ash collection work on the landing and take-off runways have allowed La Palma airport will be operational again after five days. However, weather conditions continue to move the volcanic plume in an easterly direction and no airline has decided to operate in the absence of security.

The ash cloud and sulfur dioxide (SO2) are expected to remain disposed to the east from the eruptive focus, representing an unfavorable scenario. As of Saturday, experts expect a change in wind direction that could mean an improvement for the aeronautical activity of La Palma.

Regarding seismicity, Carmen López has indicated that the energy released by seismic events has decreased in recent days, maintaining a low and stable intermediate seismicity and a decrease in deep. There is also stability in the deformations, while the emission of SO2 associated with the volcanic plume continues to be high, within the general downward trend.

Garafía: the refuge for hundreds of displaced by the noise of the volcano on La Palma

The Government of the Canary Islands, through the Ministry of Public Works, Transport and Housing, has completed this Thursday the process of handing over the keys to their temporary homes in the municipality of Tazacorte to twelve families who lost their only home to the eruption of the volcano on La Palma.

In this way, it is the second batch of homes acquired by the public company Visocan, after those in Fuencaliente, and which are now delivered to the families selected by the technical committee after a list of candidates drawn up by the team of social workers deployed in the Aridane Valley to serve those affected.

The winners and new tenants of these homes they have already collected the keys to their new houses, thus culminating the usual previous procedure in this type of deliveries, that is, visit to the buildings, acceptance of them and signing of the administrative contract document with Visocan.

The houses are one, two and three bedroom apartments, and one of them is accessible for people with disabilities. Is about apartments between 60 and 90 square meters, with kitchens installed and located in the town of Tazacorte.

For the families that lost their furniture in the eruption, the Government of the Canary Islands will pay for their purchase through a transfer to those families with a minimum of 10,000 euros to be delivered by the Ministry of Social Rights, although this amount could be increased due to the number of members of the family unit or special needs that may be had.