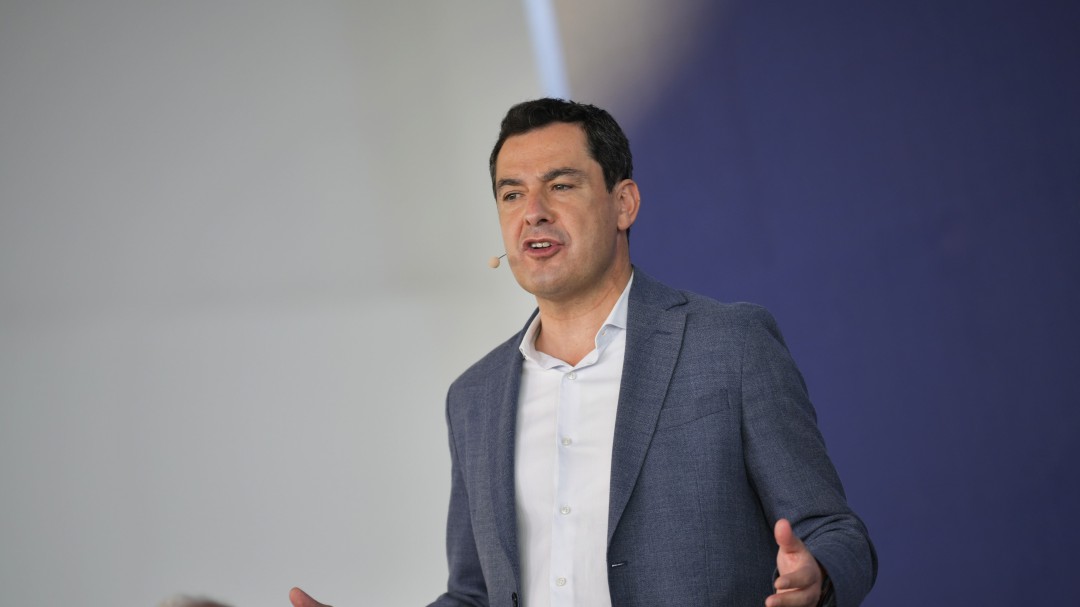 Aimar Bretos interviews Juan Manuel Moreno Bonilla on a key day for the future of the Andalusian government. With the rejection of the regional parliament to Moreno’s budgets, the shadow of the electoral advance has more and more weight. Vox, the party on which the parliamentary support for the government in coalition of the PP and Citizens was sustained, has ruined the public accounts and demands an electoral advance. All against the background of the protests in Cádiz and the agreement reached by the employers and the unions to stop the strike.

The failure of budgets and the call for elections

It is not a failure not to have budgets. When you do everything in your power and all your will to get them out, I believe that the failure is in the opposition forces. They have had a great opportunity to show that they are useful parties for the citizens.

Andalusia is not going to the polls anytime soon. My intention is to exhaust the legislature. It has been difficult for us to improve the image of Andalusia. I think we have to try to maintain an image of solidity, of stability, of trust. Andalusia grows above the average for Spain, it is not the time of banners and megaphones.

It is not good that budgets are not approved. They are very expansive, very aseptic, without ideology, we have given them the perch for the PSOE to join, but they have rejected it. Even being extended, we have the ability to continue managing public interests. I have a very strange, very complicated legislature and I have to try at least to carry it to the end.

In politics, nothing can be ruled out because it has become very unpredictable, it will depend on the behavior of the left and the right, if they are going to try to shrink the spaces for us. If they knock everything down on us, if they close all the doors on us in parliamentary terms, I will have no alternative but to convene, but it will depend on the left and the right.

I want to think that they will not be so irresponsible as to lead Andalusia to a sensation of paralysis. The PSOE and Vox have a lot to lose. I would like to exhaust the legislature, but I have my feet on the ground and I am aware that if the parliament stops me, I will not be able to continue governing Andalusia.

The words of Juan Marín

In politics you have to learn to get angry little, every day you have troubles. It is a private conversation, within the party and that he himself has explained. I had a contrary opinion and I have taken the public accounts to the extreme, I have made an effort of maximum pragmatism and I sincerely came to think that the PSOE was willing to abstain.

They were not opportune words because they were recorded a few months before and they came out the week before the budget debate. There has been some evil. My party was not behind, he made the correction the next day. Genoa is not trying to advance elections, nobody has told me that I have to advance anything. As long as I am president in Andalusia, the first thing is this community and then my party.

I have sometimes talked about electoral moments, but we have never talked about whether it was better or worse. I will make this decision thinking about the general interests, it shows in the atmosphere of the parliament that there is little left for the elections, it does not allow you to settle agreements, there is no serene conversation. The political formations are excited. Vox is in absolute electoral anxiety and they are willing to do what they have to do to lead Andalusia to elections.

The entry of Vox into the Andalusian government

It is not among my calculations that Vox enters the Government, but that a large majority of Andalusians vote for a focused candidacy. Right now it does not enter my Vox calculations. Advancing something that can happen within a year is not in my calculations. Andalusia continues to grow and that is my goal.

I am not going to get into any option of other games. I will not give advice to anyone. I am going to try to make an inclusive, temperate, broad majority, which is what Andalusia needs and there is room for both spaces to add.

I believe that Ayuso’s words had good intention. I receive his words with humility, but nobody has to tell me that I am free because I am and the day I am not free I will abandon my political training, but I do not feel that way. I act according to my conscience. I was saddened that a congress that has been worked with so much care that it was for Andalusia, to add, moderate, focused, with its Andalusian touch, because all this was postponed.

I don’t want to recriminate anyone. He did not do it in bad faith, far from it. I think she made a comment, sometimes you think that it will not go further, but we are at a time when everything is like that. What I do know is that citizens are perplexed many times when they hear this. People are in their problems, they already have enough problems. The parties are living organs and they have to be like that, there are discrepancies, there are different sensitivities and that is part of the nature of the parties.

As you know, the Junta de Andalucía has played an intermediary role, we have had a very tough role. The only way to contribute to an agreement is precisely by putting yourself in profile. We are not talking about an industrial reconversion, we must give it common sense and sanity. They are talking about a collective agreement, but deep down there is a problem.

Predictably, one of the options we are considering is to ask the TSJ to request the COVID passport in some specific places. We want to do a pilot test. I would ask citizens to be prudent, that the pandemic is still among us, we are fed up with COVID, but the pandemic continues and especially the unvaccinated, who are firm candidates to fall ill.

With our normative model it is difficult to determine if there should be compulsory vaccines, I would not like to make it compulsory, but something must be done with those who have not been vaccinated. Motivate or compel them.