The unions of the metal in Bizkaia have affirmed that the follow-up of the strike in the sector is being “similar or even superior” to the two previous strike days, abovel 80 %, while the employer says that it is “inferior”, with a 19 %.

Some 50,000 workers in the metal sector in Bizkaia are called on strike to denounce the blocking of the negotiation of the collective agreement. Today’s is the fourth of the five days of strike called by the unions ELA, LAB, CCOO y UGT after the strikes of May 23, June 6 and 7. In addition to today’s, they have also called a strike on Friday, June 21.

On the Left Bank, several thousand workers have demonstrated in the streets of Sestao and Barakaldo to demand a “dignified provincial agreement” and in protest against the blockade of collective bargaining. The march took place behind a banner with the slogan “Bizkaiko metala greban. For a fair agreement “, signed by the ELA, LAB, CCOO, UGT, ESK, CGT, USO and CNT unions. Durango A similar protest has also been carried out, with the participation of some 5,000 people.

Speaking to the media before the Barakaldo and Sestao march, the representative of IS IT OVER THERE, Mikel Etxebarria, has indicated that the follow-up of the strike has been “massive again” and that the workers have given “a very good response” to “an irresponsible employer”.

Etxebarria has indicated that they were still collecting data, but has ensured that the follow-up of the strike this Thursday “has been similar or even higher than the two previous days”, on June 6 and 7, when a follow-up of around the 85%.

The spokeswoman for LAB, Eulate Zilonizaurrekoetxea, has denounced “the behavior that the repressive forces under the command of FVEM have had throughout the morning” in which there have been “injured, detained and identified”.

He considered it necessary to “negotiate” to “achieve a decent agreement” and stressed that “the metal workers of Bizkaia have said it loud and clear with more than 80% follow-up” in the day of the strike.

The Secretary General of CCOO of Industry of Euskadi, Javier Gómez, has considered that the strike session has been a “resounding success” with a “very clear” and “powerful” response from the workers who will continue to mobilize “until the bosses change”.

The representative of the Federation of Industry of UGT, José María Rojo, has accused the employer of putting “all possible obstacles” to reach an agreement and has highlighted the “massive” response of the workers and has assured that “while the employer is blocking the negotiation we will continue to be on the street ”.

For its part, the employers’ association FVEM has estimated the strike follow-up summoned, a percentage “lower than that of previous days”. Although they have not given precise figures, the unions have indicated that the monitoring has been “similar or even superior” to that registered in the two previous days of strike, on June 6 and 7, when, according to the trade union centrals, the 85%.

From early in the morning the pickets they have cut several roads with barricades. On the N-636, in Elorrio, have set tires on fire in the port of Kanpanzar, causing traffic problems.

On the N-634, as it passes through Amorebieta-Etxano, several of the participants in a protest have proceeded to pile up tires and set them on fire. As reported by the Security Department of the Basque Government, during the incidents The Ertzaintza has arrested two people accused of attacking the authorities. Subsequently, firefighters and public works have doused the fire and have proceeded to clean the road, which has been left open to traffic normally. 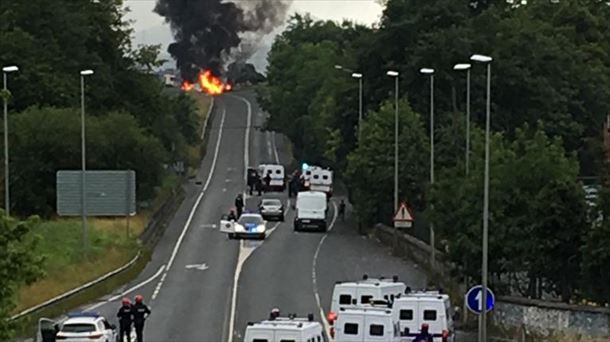 The protests of the workers have also generated retentions in the accesses of San Mamés, in Bilbao, and have made intermittent cuts.

This new strike, in addition to the one scheduled for this Friday, June 21, occurs after the last meeting of the negotiating table, held last Monday, will again conclude whitout deal, after the unions rejected the new proposal presented by the Biscayan Federation of Metal Companies that included improvements in economic conditions.